Skyportz has revealed a modular vertiport design by leading architectural firm Contreras Earl Architecture that can be shipped anywhere in the world.

The company also announced at the World Air Taxi Congress in Istanbul, Turkey that it had now opened its property partner database to accept registrations anywhere in the world from potential vertiport locations.

Skyportz said the vertiport design had been created with site specific input from Arup and To70 Aviation and that “these beautiful sculptural buildings can be deployed in components packed into shipping containers anywhere in the world”.

Electric aircraft developer Beta Technologies will provide battery charging infrastructure which will be suitable for almost any aircraft that may use the vertiport.

Skyportz chief executive Clem Newton-Brown said at the congress it was urgent that the property industry and policy makers enable vertiport networks to be established.

“The frontrunners have had over $10 billion invested into aircraft development in the last year,” he said.

“This investment needs to be doubled down into vertiport infrastructure if the business cases are to be realised.

“There is no point developing these aircraft if they can’t land in new locations.”

No-where in the world has any jurisdiction set out definitive rules, regulations and standards for new vertiports, Newton-Brown, a former deputy lord mayor of Melbourne and Yarra River water taxi service provider, said. 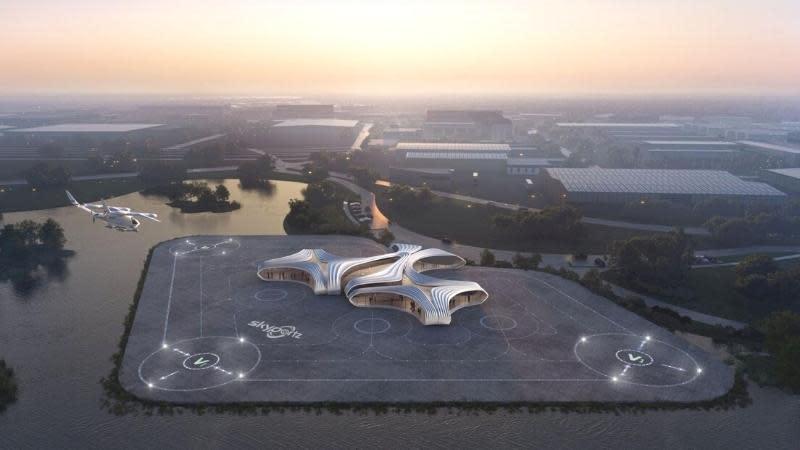 ▲ A render of the planned Melbourne vertiport.

“Skyportz is offering the property industry a chance to get on the front foot and install these lightweight, affordable vertiports in advance of being able to actually use them,” he said.

“We don’t need to wait for the policy makers, these buildings can be used for other purposes for now and will be on site and ready to activate for aviation in the future.

“With our vertiport database growing daily we can assemble networks of sites in any launch market sought by investors”.

Newton-Brown stressed that the planned vertiport in Melbourne would be a game-changer.

“With the development of a vertiport in a business park we are breaking the nexus between aviation and airports,” he said.

“For this industry to succeed it needs to have policy makers and property owners pushing the envelope to support new mini airports in locations people want to go.”

Previously in Queensland Skyportz said flying taxis could transport athletes around the 2032 Brisbane Olympics after it announced it would develop a transport hub north of Brisbane and make the aircraft in Queensland.

At the time Newton-Brown said they were also in the process of identifying sites near the Olympic venues to join the network of facilities.