Melbourne will be home to Australia’s first vertiport for the emerging electric air taxi industry.

Skyportz unveiled the Contreras Earl Architects-designed vertiport, which was slated for Caribbean Park in Melbourne’s east.

Skyportz chief executive Clem Newton-Brown said they had teamed with Contreras Earl Architects, To70 Aviation, Arup and Microflite to create a modular design for a vertical takeoff and landing [VTOL] airport.

“With the development of a vertiport in a business park we are breaking the nexus between aviation and airports,” he said.

“For this industry to succeed it needs to have policymakers pushing the envelope to support new ‘mini airports’ in locations people want to go.”

Newton-Brown said the Caribbean Park vertiport would be the first in a network of sites ahead of the electric VTOL aircraft becoming operational.

“However, community support is going to be the key to the development of these services. The community is going to have to see the benefits,” he said.

“Electric air taxis will be a new era in aviation where clean, green and quiet small aircraft can take people to places they want to go.”

The federal regulator Civil Aviation Safety Authority recently released a roadmap on the introduction of advanced air mobility [AAM] in Australia, and it is anticipated that electric vertical takeoff and landing aircraft could be commercially certified as soon as 2024.

"We are proud to have designed Australia’s first vertiport—a beautiful, sculptural, ground-breaking terminal that contributes to the evolution of architecture and to the future of our communities and cities,” he said. 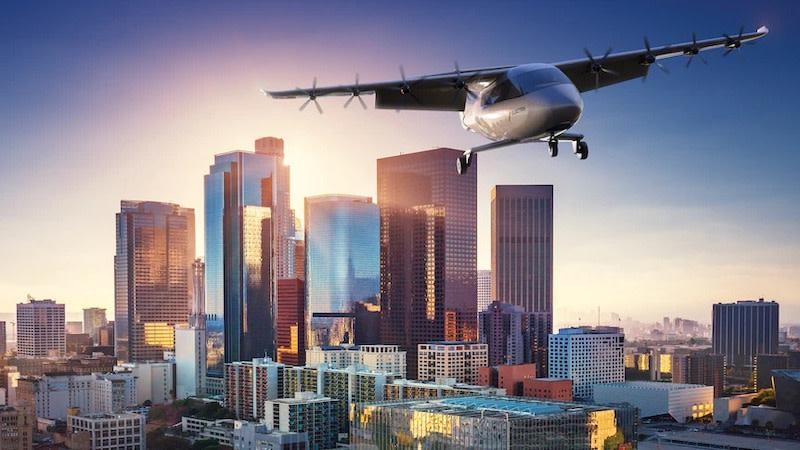 ▲ A render of an Electra Aero aircraft over Los Angeles. The company is an aviation partner with Aeroportz.

“Using advanced technology, we developed an efficient modular design made with recyclable aluminium.

“The system is lightweight, prefabricated and assembled on site, so that it can be adapted and configured for a broad range of settings and scaled for mass production.”

Skyportz will seek investment partners to fund the construction of the vertiport at Caribbean Park, which will be the first in a stable of vertiports strategically located around Australia.

Delaney said battery-charging infrastructure, transport-network planning and passenger-airport experience would all need to be considered as part of the design process.

Victorian treasurer Tim Pallas has thrown the government’s support behind the burgeoning advanced air mobility industry, to help “unlock cost and time savings for companies in a range of industries”. ▲ A render of Skyportz’s planned air taxi manufacturing hub and landing pad in Queensland at the Australian Advanced Manufacturing Centre of Excellence in Petrie.

“The use of AAM in Victoria has the potential to revolutionise logistics, service delivery, emergency services, regional connectivity and passenger transport—providing opportunities for improvements in safety, time, cost and noise,” Pallas said.

“As a zero-emission transport mode, AAM will also support the decarbonisation of our society.”

Meanwhile, in Queensland, flying taxis could transport athletes around the 2032 Brisbane Olympics after Skyportz announced it would develop a transport hub north of Brisbane and make the aircraft in Queensland.

Newton-Brown, a former deputy lord mayor of Melbourne and Yarra River water taxi service provider, said they were also in the process of identifying sites near the Olympic venues to join the network of facilities.