Shopping centre giant Vicinity Centres has moved a step closer to its ambitious plans to transform the centre of Bankstown with the New South Wales government approving changes to local planning controls.

The Department of Planning and Environment has agreed to amendments to Bankstown’s local environment plan which will allow increased building heights and floor space ratios.

It’s another step in Vicinity’s staged, 30-year plan to re-develop 11.4ha of central Bankstown into a thriving mixed-use urban neighbourhood.

Under its plan, the project, known as Bankstown Central, at least 19 towers will be added around the existing central shopping centre.

Early plans for the $1.3-billion redevelopment, about 20km south-west of Sydney, include 1255 residential apartments, 439 hotel rooms, 694 student accommodation units and about 90 serviced apartments.

The existing shopping centre, which was built in 1966, counts Myer, Target, Big W, Kmart, Woolworths, Dan Murphy’s and Coles as it anchor tenants, as well as 260 speciality stores. ▲ The Bankstown Exchange is one of three buildings that have already been approved for development.

In documents lodged in support of the planning proposal, planners Urbis said height and density would be focused along North Terrace and near the existing Bankstown railway station and future metro station.

About 5000sq m of public park and another 5000sq m of pedestrian-focused plazas would be part of the plan. Jacobs Street between The Mall and Northern Terrace would be extended for road traffic and pedestrians.

The bus interchange and layover will be moved to a new permanent location either within or outside of the development site.

The gateway approval will more than double building heights for the site, from 35m and 41m up to 86 metres.

In total, the proposed land use is split between 147,500sq m of residential and 158,750sq m of non-residential floorspace. Urbis said that mix would deliver 10,215 new jobs within the Bankstown centre. 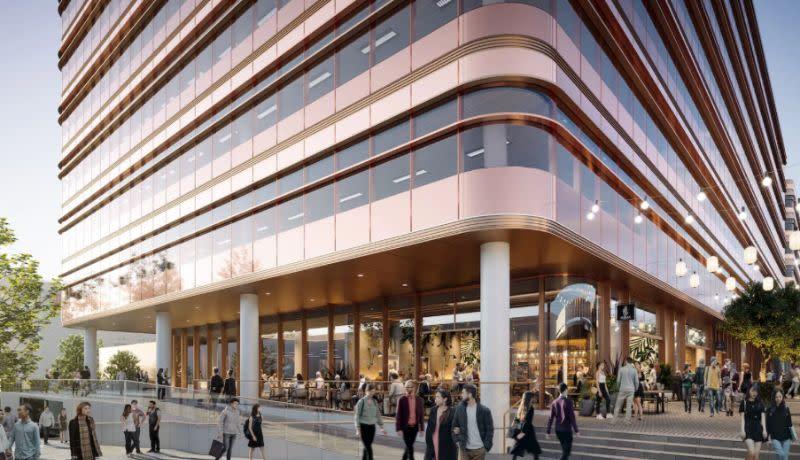 ▲ The 30-year-proposal calls for up to 19 commercial and residential towers around the existing shopping centre.

“Bankstown Central (is) a truly mixed-use centre, supporting employment growth and commercial office provision as well as a greater diversity of uses, including residential accommodation, student housing, hotel, and child-care, whilst continuing its function as a regional shopping centre,” Urbis said.

“The new population at the site, including residents, students, hotel visitors and on-site workers has the potential to generate an additional $88 million in retail spend, which will contribute to improving the performance of existing retailers within the centre as well as supporting new local retail businesses.”

The gateway approval comes after discussions with planning, urban design, and traffic teams at Canterbury Bankstown City Council dating back to 2017.

Vicinity Centres, a publicly-traded real estate investment trust has stakes in about 60 shopping centres, and has continued its turnaround in the wake of the pandemic and a rebound in the retail sector.  It reported a net profit of almost $1.22 billion for the 12 months to June 30 last year—up from a $258-million loss the previous year.