Being immersed in city life is part of the attraction of university but as premium space in city centres becomes expensive and scarce, institutions are looking at a modern way to expand.

Vertical campuses in the education sector have redefined primary and secondary schools.

Now, Australian universities are developing the next generation of vertical campuses, bringing in commercial elements and alternative funding, mixing different disciplines and futureproofing buildings to ensure they remain relevant to end users in a post-Covid world.

Teaching will begin at Western Sydney University’s $340-million high-rise Bankstown City campus this year and Monash University invested in a major campus which was completed by Multiplex last year.

The university’s city program director Sean Henriques says the building of a vertical campus was a step change in how the university approached its operations.

“The world is changing at an incredible rate, and it will continue to do so,” he says.

“Especially in the last two years we’ve seen shifts in teaching and learning modes, and the vertical campus gave us a chance to genuinely think through what the future looks like rather than retrofit into existing spaces and models.”

The difference between vertical campuses and the use of tall buildings by universities is an important one.

Vertical campuses must provide access to the services, technology, amenities and integration that traditional campuses provide.

However, they might also have to integrate multiple disciplines or even institutions, such as at Tokyo’s Mode Gakuen Cocoon Tower, within one building rather than a block centred around one discipline.

“A campus is a living, breathing ecosystem,” says Henriques.

“It’s a constant orchestra of movement essentially. That’s the difference between thinking about it as a campus rather than a building with a university in it.

“You’re not just there as an isolated piece. The connection with the city is part of that story.” Conventionally, universities have had sprawling campuses centred around open spaces close to city centres. But land in urban areas comes at a premium which is prohibitive to expansion and increasingly difficult to obtain.

Lyons director Neil Appleton worked on the design of the vertical campus in Perth for Edith Cowan, and says that every design is different with no one-size-fits-all for vertical campuses.

“The brief for Edith Cowan was unique, bringing together creative industries, technology and business into an inner-city melting pot,” Appleton says.

“We have enormous performing arts spaces, sound stages, film studios, design studios, matched with some of the unique business and law spaces with significant technological demand and are catering for a lot of postgrad students as well.

“What we tried to do was activate the building all the way through, aiming for those much higher utilisation rates.”

Moving the library or learning commons to the centre of the building aimed to prompt further activation and integration, two of the criteria that make an effective vertical campus, Appleton says.

“Campuses are typically tied together by green space, but in a city that’s not always possible, especially in a vertical building.

“Fundamentally you want to provide a diversity of experience which makes students want to stay there, for the teaching as well as the social element of the experience. Getting the balance is really important.”

The financial case for vertical campuses

One of the biggest obstacles to developing a new campus is funding. Vice-president of infrastructure and commercial at Western Sydney University Bill Parasiris made the longer-term financial case for vertical campuses.

“A vertical campus allows us to streamline our offering in a more cost effective way,” he says.

“We have more state-of-the-art facilities, but do not provide retail outlets and entertainment facilities which universities normally do, which tend to take away from teaching and learning.

“Capital cost is lower and that creates a saving, which makes education more accessible.

“What we’ve learnt is that universities create significant value and they shouldn’t lose that value they create.

“If we work with industry partners we can co-create value, which makes it more sustainable and potentially less reliant on government funding.” 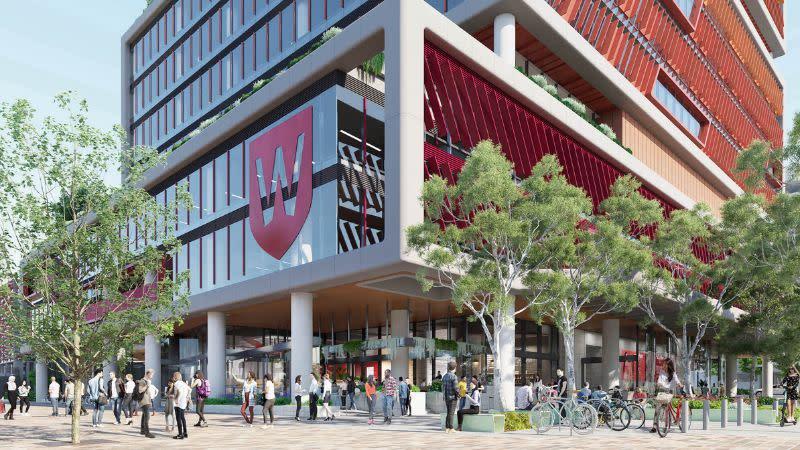 ▲ Western Sydney University’s Bankstown Campus is due to open to students later this year.

Western Sydney has invested more than $1 billion in vertical campuses, he says, with no federal or state government funding.

“Universities used to sign up to be the financier,” Parasiris says.

“But now, we’re extracting the value from what we create and we’re not taking scarce capital away from day-to-day operations to build a new building. It all comes from our partnerships with industry.”

Unlike other vertical campuses, Bankstown is also built so it can provide an alternative revenue stream for the university.

“The flexibility allows, if our student numbers increase or decrease, for the space to be subleased to offset our costs, and it’s space industry wants to be in,” Parasiris says.

“We do play developer and we also partner with them, but we want to realise developer returns and uplifts as a blue chip investor, partner and tenant, and offset the costs for our core purposes: teaching, learning and research.”

Adapting towers to accommodate the needs of higher education institutions in urban areas can be a challenge.

Western Sydney has dealt with this at its Bankstown campus by including a microfactory into its build.

“By the end of March we’ll have a full-blown microfactory—we want to prove that manufacturing can occur in a commercial building,” says Parasiras.

“If you want to 3D print a motor vehicle part, you won’t need an industrial warehouse on the outskirts of town.” ▲ The Monash University campus was completed by Multiplex last year and offers 10 levels of teaching and learning space for 6900 students.

Some of the major benefits of a vertical campus for students, lecturers and researchers are the collegiate and integrated approach which ensures they diverge from traditional campuses in aesthetics as well as purpose.

“We didn’t feel that was the way of the future when you think about the merging of disciplines in society and business as a whole.

“We’re training people to go into those spaces and make them work ready, so why would we then be stuck in the old model?”

“The intent of our vertical campuses is to create a more engaging experience, and making that accessibility easier by bringing the campuses to where our students live and want to work.”