The development application cites the project’s vision as seeking to build “a vibrant new business district and revitalise the face of Sydney’s busiest transport interchange”.

Adjacent to Central Station at the southern end of the CBD, the development—designed by local architects Fender Katsalidis and US firm Skidmore, Owings & Merrill—would sit next to tech juggernaut Atlassian’s approved $1.4-billion tower.

Central Place Sydney is a joint proposal by the country’s largest office landlord Dexus and the local arm of Singaporean property powerhouse Frasers, which hold the two existing office blocks earmarked for redevelopment.

“The design establishes a new civic space that extends into the workplace—blurring the lines between public and private, while producing a highly vibrant and diversified experience,” the DA said.

“It will be one of the most sustainable commercial developments in Australia, with workplace environments that integrate nature where possible, rely on passive shading and natural ventilation, replace structural concrete with timber, and offer a range of amenities.”

Under the revised plans now on public exhibition, the proposed heights of the project’s north and south office towers remain unchanged at 35 storeys and 37 storeys respectively. Overall the development would comprise 145,325sq m of office space and 9668sq m of retail tenancies.

According to the DA, the two towers are “expressed as three individual forms in order to reduce their visual density”.

Over recent months, several amendments have been made to the proposal as a result of matters raised by the City of Sydney and its design advisory panel.

They relate mostly to the public realm and the proposal’s two smaller structures known as the Connector and Pavilion.

The Connector is an office-retail building shrouded in bronze mesh designed by Edition Office as a cornerstone that seeks to anchor the development to the street and create a laneway network connecting Henry Deane Plaza and Lee Street.

It has been reduced from 10 storeys to eight, while planned link bridges previously connecting it to the podium and central atrium have been scrapped. 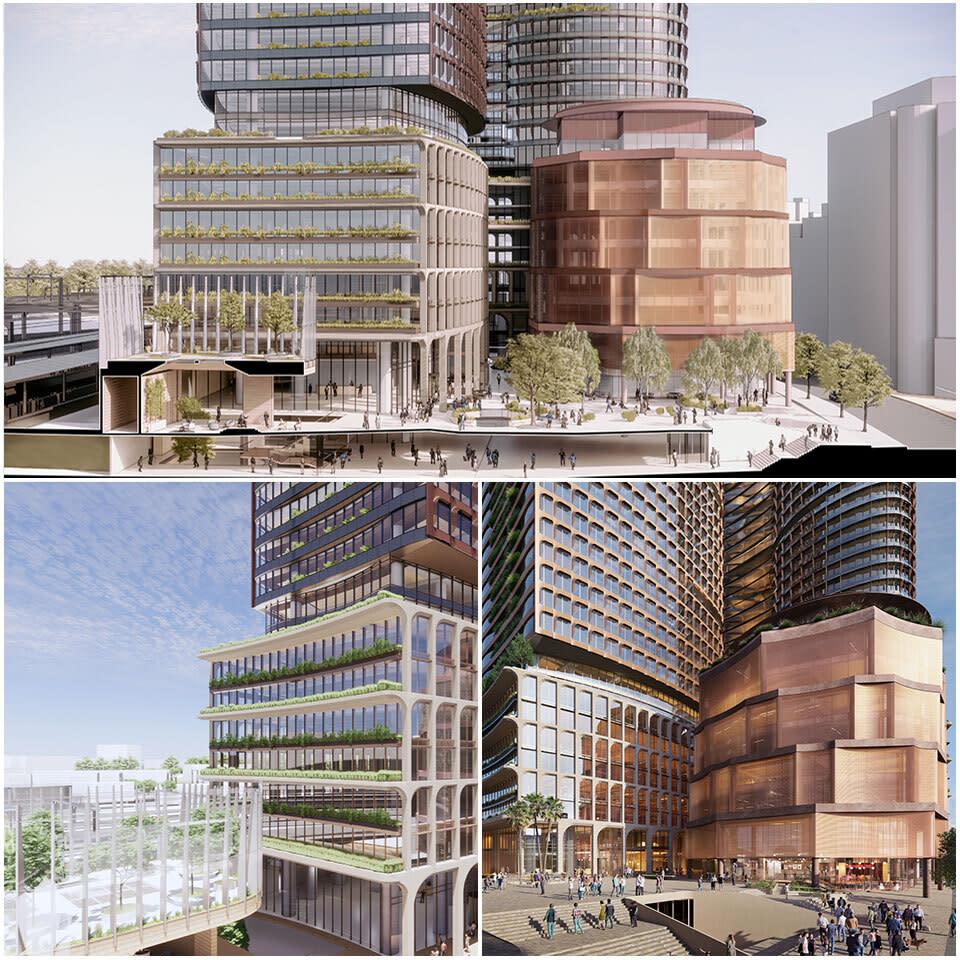 ▲ The so-called Connector, an office-retail building shrouded in bronze mesh, is designed as a cornerstone anchoring the development to the street and creating a laneway network connecting Henry Deane Plaza and Lee Street.

The Pavilion, between the northern end of the site and the neighbouring Atlassian tower, is a wind mitigation canopy that also has been designed to double as an activated multi-functional space fronting Henry Deane Plaza. Its design has been simplified, removing a planned vertical planting system.

Other key changes include a “reimagining” of the public realm incorporating an open laneway landscape design allowing for increased retail activation; and minor refinements of the tower facades, including deletion of the building-integrated photovoltaics system.

As well, the podium has been reduced by two levels consistent with the height of the Connector “creating a harmonious relationship between the two elements”; and roof terraces at the northern and western ends of the towers are now to become landscaped planters inaccessible from the adjoining office space.

The amended Dexus-Frasers Property Group proposal for Central Place Sydney is on public exhibition until August 25.

Another key element of the application is an underground facility for essential services which will allow future over-station development and facilitate the renewal of Central Station, a major gateway to the CBD.

Central Place Sydney is envisioned as a landmark development to emerge from the NSW government’s controversial unsolicited proposal process at Sydney’s so-called “Silicon Valley” which encompasses 24ha across the station’s tracks.

Rezoning of the area to the western edge of the station has enabled the construction of buildings up to 206m—compared to 35m previously.

The project is expected to create 700 jobs during construction and will accommodate more than 10,000 workers on completion. ▲ Several amendments have been made to the proposal, including the removal of a vertical planting system to The Pavilion, a wind mitigation canopy that doubles as an activated multi-functional space fronting Henry Deane Plaza.

Nearby, a four-storey building and former home of one of Sydney’s most celebrated eateries, Golden Century, has changed hands for about $50 million. It is understood the asset at 393-399 Sussex Street has been snapped up by developer Anson Group.

On a 708sq m site it has 2135sq m of net lettable area but also offers a variety of alternate development options including retail, office, and hotel uses.

“Haymarket’s location close to Central Railway and the Tech Central Precinct is ideally poised to benefit from an unprecedented private and public investment into the area,” said JLL’s James Aroney who negotiated the deal with colleague Linda Ko and Savills’ Jordan Lee and Andy Hu.

“This regeneration underpins Chinatown’s appeal as one of the most vibrant districts in Australia.”