Planning is under way to build Sydney Olympic Park into a connected and vibrant five-minute city and quadruple its population by 2030.

It was the home of the ‘greatest Games of all time’—but it was the Olympic Games legacy that caused the “identity crisis” of the 640ha park.

SJB has been appointed as the project lead for the next phase of the Sydney Olympic Park Masterplan 2050 to lead the renewal of the NSW government-owned park.

SJB director Jonathan Knapp said the park had always been slated for a bigger population, but it had been too disconnected and had become an “island in the centre of the city”.

But the masterplan for “Sydney’s Green Beating Heart” will create a series of highly connected diverse vertical neighbourhoods with a walkable five-minute city at the heart of its design, Knapp says.

“After the Olympics, the Sydney Olympic Park has really struggled to establish its own identity,” Knapp says.

“It’s this disconnected island in the middle of the city that is home to more than 5000 people, but it doesn’t have the social infrastructure you need in a neighbourhood.

“It has some world-class sporting and events facilities, but they’re not accessible to the community of Sydney Olympic Park.” 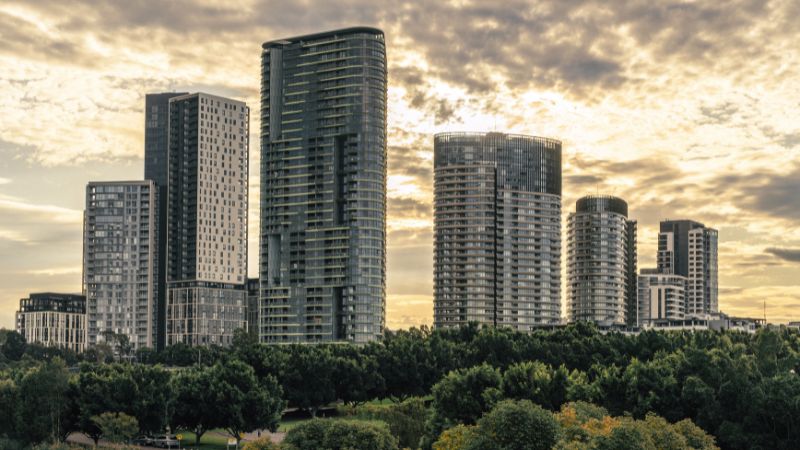 ▲ High-density developments will be concentrated in the Metro area and the town centre where developments are already focused.

Knapp says the Metro station and potential to be connected to the Parramatta Light Rail in the future will help the suburb evolve into a vibrant community every day of the week, instead of just on game day.

“Metro will be the game changer for Sydney Olympic Park,” he says.

“It’s going to really change people’s perspective of what it is and over time they will forget the Olympics legacy and realise its natural value is spectacular.

“This masterplan is part of bringing the vibe and placemaking to this precinct.

“The bones are absolutely there. We’ve really fallen in love with it, and we just need to make sure everyone else does too.”

Knapp said high density would be concentrated in the Metro area and around the town centre, with asset classes including build-to-rent, key worker and affordable housing all “on the table”.

Knapp says their job as project lead was to develop a master plan that would entice an additional 19,000 residents to the area by 2030 and deliver on the aspirations for the site. There are currently about 5600 people living in the suburb and about 19,500 who work there.

According to planning documents the master plan is also aspiring to tackle the convergent crises of housing affordability and equality, climate change and the Covid-19 pandemic.

Knapp says the pandemic has recalibrated the work-life dynamic with more people continuing to work from home or close to home, a greater emphasis on access to green space, and a walkable local community. 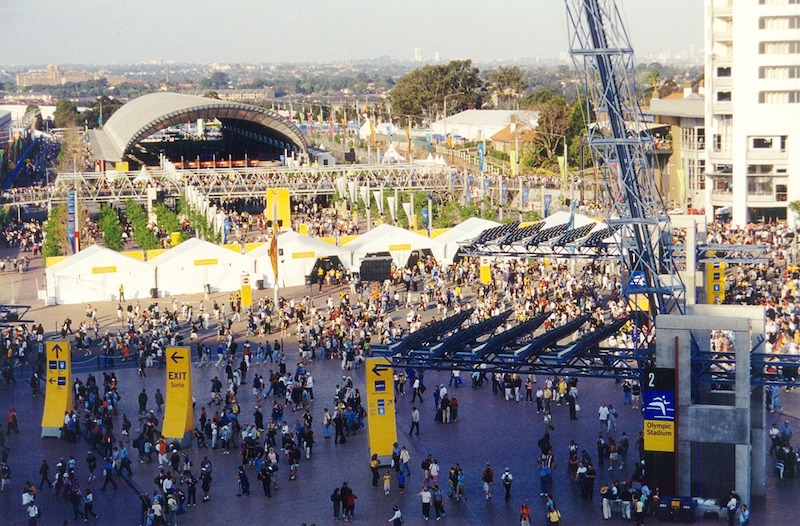 ▲ The precinct during the 2000 Sydney Olympic Games.

The social infrastructure proposed to activate the community includes a variety of retailers, healthcare providers and childcare, in addition to employment and entertainment. Knapp says there is a greater focus on the ground plane and a more fine grain approach to the mix of commercial and residential developments.

“The five-minute city is the ability to live and work and play within your local community,” Knapp says.

“Because the land is owned by the state government there’s a really unique and valuable opportunity. If we’re looking to push an affordable leasing agenda what better place to concentrate our energy and attention. We’ve got a planning minister that wants to boost affordable housing.

“Sydney Olympic Park will form part of the fabric of Sydney. It has always been the plan for it to be a bigger precinct and it can play an important role in developments for the greater good, whether its student housing or key worker accommodation or build-to-rent.”

Sydney Olympic Park Authority chief executive Leon Walker said the vision for Sydney Olympic Park was to transform it from a primarily events-focused destination into a thriving, activated community in the heart of the City’s growing western suburbs.

“It will be home to almost 24,000 people by 2030 and our vision is to make more than half of all housing diverse and affordable, with homes that meet the needs of the community,” he said.

“We heard loud and clear during community consultation that the focus on events and sport remains essential to the park—but instead of a suburb that only comes alive during big events, people want the park to be active day and night, weekdays and weekends, for locals and visitors alike.

“The vision also proposes more investment to make the park a more attractive place for people to live. There will be a focus on health and wellbeing, social infrastructure, more access to arts and culture, and an increase in informal sport and recreation opportunities.”