Brokers say they expect yields of 6 per cent on a state-of-the-art childcare centre fresh to the market in East Brunswick as developers look for alternatives to traditional strata retail.

The 802sq m facility, on the ground floor of an eight-storey residential building in Brunswick Road, has been leased for 10 years to HEI Schools—a boutique national childcare provider—for $230,000 a year.

Mark Stafford, a childcare specialist with JLL, agreed that at 6 per cent yield, they’ll be looking for a selling price of about $3.85 million.

“Obviously the vendor is after the best price he can get,” Stafford said, “but he is a motivated seller, and that price is about where the interest is.”

When Melbourne-based developers Jameson Capital first planned the project comprising 97 one-, two- and three-bedroom apartments, the ground floor was given over to seven shops with six car parking spaces.

A shortage of affordable space for childcare facilities in Australia’s major cities changed all that.

“We are witnessing a real evolution of design and creative outcomes within the childcare and essential services development market,” said Stafford.

“Modern childcare has traditionally been stand-alone facilities of 1500 to 2000 square metres. This premise is radically different.

“Add to that childcare groups have been priced out of Brunswick East. Certainly, it is difficult to find suitable space for stand-alone facilities.”

“The problem for childcare centres is the underlying land values are so high, particularly metropolitan or inner-city sites,” she said. “And then the lots have a much smaller footprint. 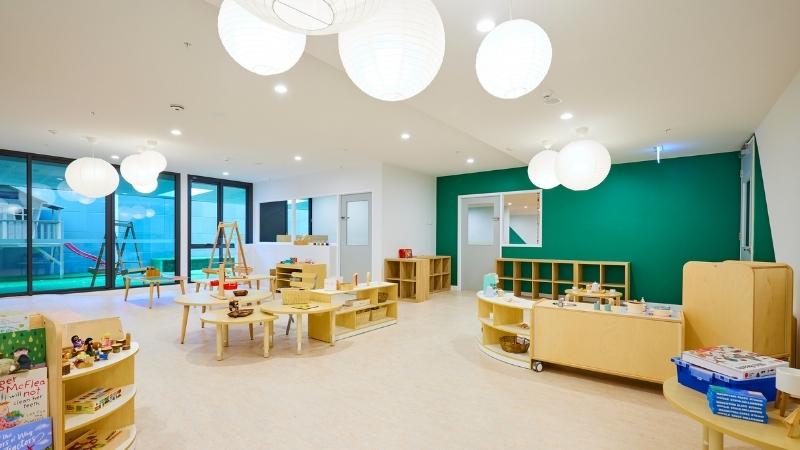 ▲ The building's childcare centre has been leased for 10 years to HEI Schools.

“If you’re going to dig out a basement you might be looking at a million dollars to begin with.

“We see hundreds of sites come across our table but are you going to take a risk on development costs for a childcare centre?”

Stafford said there had already been interest from occupants in the apartments above the new centre. The balance of enrolments will be filled from other areas of Brunswick East, which, he said, was an undersupplied childcare area.

“Tenants play a big part in deciding where these facilities go,” Couper said.

“There are a lot of considerations, it’s a very sophisticated business and tenants want a say.

“And remember that once you have a child in a centre, they could be there eight years. It becomes a very personal, long-term relationship.”

The facility, to be known as HEI Schools Brunswick East, has a permit for 50 children. Government service approval for the facility is expected soon.

Stafford concedes how investment markets will respond to the new product remains to be seen. Until now the only strata childcare centres to market have been in located in industrial areas and involved much bigger investments. 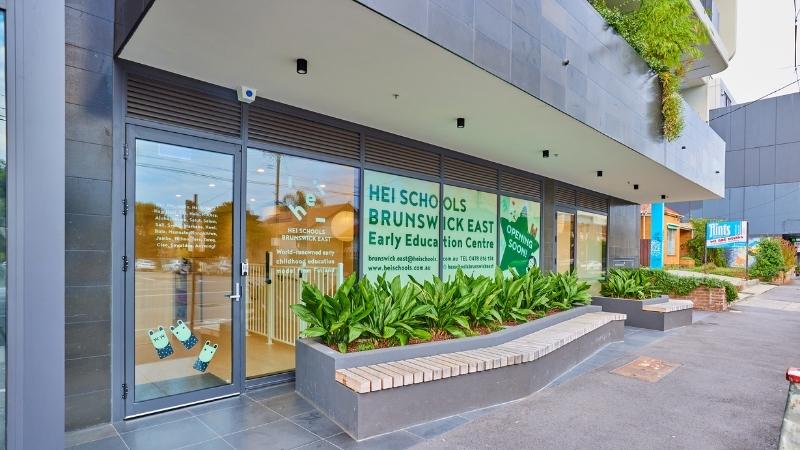 ▲ The childcare centre’s shopfront in the East Brunswick development.

In September 2020, Kids Planet Child Care in North Ryde, New South Wales—an area of about 1100sq m within an 85-place centre—was sold for $4.65 million, representing a yield of about 6.3 per cent.

“We have all seen with residential developments where the commercial element remains half empty. So childcare services are certainly something developers are looking at. It gives them another option.”

And Australia’s newest government is banking on that continuing.

Going into the weekend’s election, the Labor Party promised a $5.4-billion plan to lift the maximum childcare subsidy rate to 90 per cent for the first child in care, keep higher subsidy rates for every family for the second and additional children in care, and extend the increased subsidy to outside school hours care.

Couper says whatever political party is in government they will always promise money to childcare.

“From an investment point of view there is a huge appetite for childcare,” she said.

“It is an essential service. There is always money for childcare. It plays a very important role in the economic cycle.”