The Reserve Bank of Australia has identified risky excessive borrowing as an ongoing problem for lending institutions and the broader economy in its Financial Stability Review.

The RBA’s October financial stability review was delivered in the wake of the Australian Prudential Regulation Authority announcement of an increased loan serviceability buffer to counteract growing concern over high debt loans and financial risk.

But overall Australia’s economy was resilient.

According to the central bank’s report, “low interest rates have contributed to high prices for financial assets and housing” which has led to higher borrowing.

“With interest rates expected to remain low, investors have been taking on more risk to seek higher returns,” the report stated.

“In Australia, and some other countries, there have been large increases in housing prices and an acceleration in borrowing.

The RBA reported that a significantly lower number of borrowers had applied for loan repayment deferrals this year, in contrast to last year, and that policy measures had supported households’ and businesses’ balance sheets.

But it warned that financial stress was still being experienced in highly impacted industries including tourism, and those living in areas under the most “stringent” lockdowns. 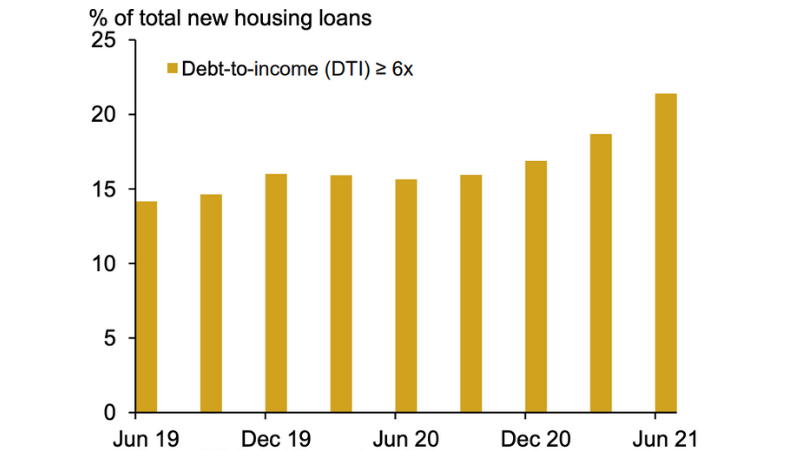 CBA Economics head of Australian economics Gareth Aird said the report painted a picture of a central bank that was paying close attention to the housing market and rising debt levels.

“The RBA has expressed concerns around the overall level of household indebtedness for some time … without doubt those concerns have been notched up more recently given the acceleration in borrowing,” Aird said.

“But if credit growth remains stronger than income over coming months, pressure is likely to intensify for APRA to make some more policy changes … it is crystal clear that the RBA will seek to have any concerns around an overheated housing market addressed through more macroprudential policies from APRA.

“Rapidly rising home prices or an acceleration in household debt because of record low rates will not directly feed into the RBA’s decision making around when they commence normalising rates.”

“Both countries are witnessing very strong house price growth and Australia’s housing regulator this week lifted the serviceability buffer banks need to use to assess a borrower’s capacity to repay a mortgage from 2.5 per cent to 3 per cent,” he said.

“APRA described the change as ‘fairly modest’ and we still expect it to impose debt-to-income restrictions next year.”

Thieliant said the RBA was heavily focused on underlying measures of inflation and wage growth rather than headline inflation, with forecasts remaining firm for a flat RBA interest rate through to 2023.

“The regulator plans to publish an information paper on its framework for the use of macroprudential tools at some point over the coming months,” Kilroy said.

“This seems likely to represent a marker for further intervention, especially if the pace of price growth isn’t tamed in [the fourth quarter] and lending to marginal borrowers does not ease.”

“Interest rates are another risk … our baseline assumption is that the RBA will begin to lift rates from the third quarter of 2023, but it could start earlier if inflation overshoots expectation.”