The Victorian government says its planned above-ground station for the Melbourne Airport rail link will cause less disruptions, cost less and be done faster than the underground stop airport management wants.

The government has now released its business case for the airport station as well as a new station at Keilor East as part of the project.

The line will connect the city and the airport for the first time by rail with a projected journey time of 30 minutes.

Forecast to be completed in 2029, the line will also run through Sunshine Station and the Metro Tunnel, “maximising connections to Melbourne’s booming west and south-east, and Victoria’s major regional centres of Ballarat, Bendigo, Geelong and Gippsland”, according to the government.

“Trains on the new airport rail line will provide a ‘turn up and go’ service, with trains every 10 minutes.

“More than 30 stations across Melbourne—from as far away as Cranbourne and Pakenham—will have a direct connection to the airport via the Metro Tunnel. Passengers from most other stations in Victoria will only need to change trains once.”

The Keilor East station will link more than 150,000 residents in the Moonee Valley area to Victoria’s rail network for the first time.

The government said its business case shows that Melbourne Airport Rail would deliver wide-ranging economic and connectivity benefits for decades to come and the project would return up to $2.10 for every dollar spent.

Melbourne Airport Rail is expected to cost between $8 billion and $13 billion, and increase Victoria’s gross state product by up to $17.9 billion.

The business case recommends a new elevated station at Melbourne Airport as it would be quicker and more cost effective to deliver and reduce disruption to airport users during construction.

But while the airport supports a rail link, Melbourne Airport chief of ground transport Jai McDermott said an underground station was preferred.

He told media the airport’s preference had always been and remained an underground station, which, he said, “provides a superior passenger experience, safeguards for future connectivity and is appropriate for Victoria's international gateway”. 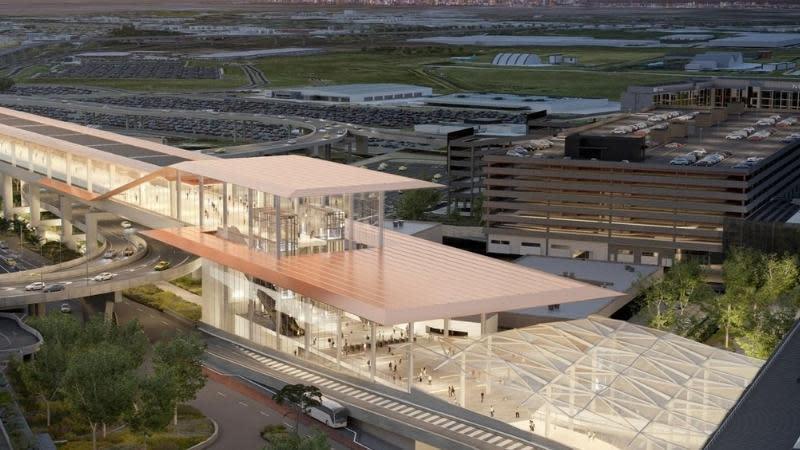 ▲ A render of the proposed above-ground station at Melbourne airport.

“It is important that the new rail station works for all airport users, not just those who arrive by train, and that it is a station all Victorians can all be proud of.

“We continue to work in good faith with the Victorian government to deliver this important project for Melbourne, however we are yet to agree on station location and design.”

The project also includes an elevated rail bridge over the Western Ring Road (M80 Freeway), and major upgrades to Sunshine Station, including a new concourse, improvements to existing facilities, and carparking.

The Victorian and Federal governments have endorsed the business case, and each has committed $5 billion to the project.

Melbourne Airport Rail is expected to create up to 8000 jobs during construction and opportunities for hundreds of apprentices, trainees and cadets through the Victorian Government’s Major Project Skills Guarantee, according to the state government.