Landream’s plans to enter the build-to-rent market are under way after its planned $105-million tower was approved by the City of Melbourne.

The 41-storey tower near the Queen Victoria Market was originally going to be a build-to-sell project and was approved late last year, but the plans for 100-106 Franklin Street, Melbourne were amended.

However, there were concerns voiced about the development as artwork on half of Blender Lane, one of Melbourne’s iconic graffiti laneways, would be demolished.

The 1696sq m site is currently home to the five-storey Burbank House and two-storey warehouses, some of which were built in the early 1900s and which would be partially demolished under the plans.

The minister for planning Richard Wynne referred the application to the Future Melbourne Committee, who supported the plans while unanimously voting to find a way the council could have a role in protecting street art in the future. 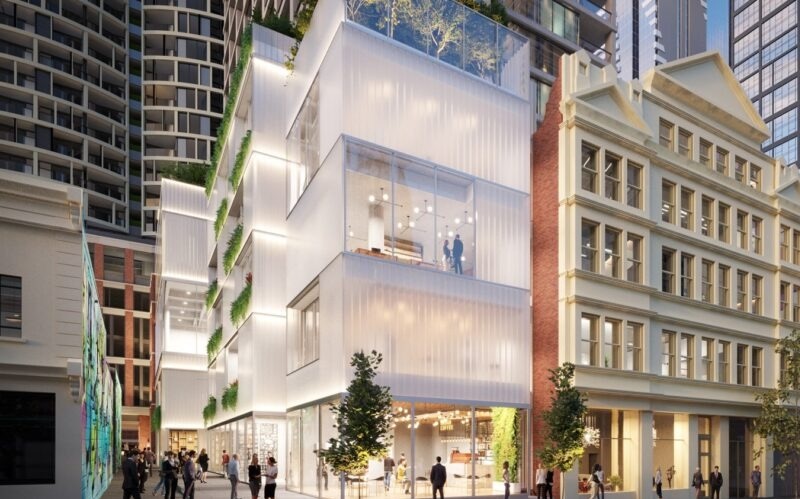 ▲ The lower part of the tower and the remaining graffiti laneway on Blender Lane at Landreams 100 Franklin Street Development. Image: Bates Smart

Deputy lord mayor Nicholas Reece said the area was gaining a lot of attention from developers lately and the design for this project was of a very high standard.

“The west side of the building that faces onto Blender Lane does look and seem to work very well, it's very modern in its design which juxtaposes well with the heritage of Burbank House,” Reece said.

“This project delivers some significant upside ... the widening of Blender Lane and active frontage that will provide a through block link … literally right to the entrance of the dairy produce hall at Queen Victoria Markets.

“It was also very positive to see the build-to-rent component and the basketball court as well which as I understand it is publicly accessible.”

Cr Rohan Leppard agreed with the deputy lord mayor and was optimistic the council could find ways to promote and protect street art in the future without over-regulating artists.

“At a personal level of course I am devastated by the potential outcome here as chair of the arts for eight years,” Leppard said.

“I’m very familiar with the importance of Blender Lane, the artist studio and the role these laneways play to emerging artists, to the street art culture generally and art in Melbourne full stop.

“It’s simply the case though, that our planning controls cannot regulate ephemeral art and require the non demolition of spaces that have not been graded as having heritage value.”

Leppard said if the laneways were declared a special place with special character they would require special permission to paint and the street art community would go elsewhere.

Melbourne Heritage Action president Tristan Davies said there could have been an opportunity to incorporate the laneway wall to stay there, to add to the city’s character.

“We simply asked again that an additional brick wall along the laneway be retained, just one wall with much of its 1920s brick character of course overlaid with some really important street art,” Davies said.

“It does allow the developer to make a pretty tidy profit from this site and have just about everything they want but retain an iconic laneway feel rather than something pretty generic that you could find in any city of the world.”