South-east Queensland property developer Keylin has blamed widespread market volatility for its decision to cut one of the two 15-storey towers it had planned for Brisbane’s CBD northern fringe.

Approved plans for nearly 100 hotel rooms have been shelved and radically scaled-back changes to the development have been submitted to Brisbane City Council.

Keylin had won council approval in July last year for twin towers over a consolidated podium with 113 apartments and 120 short-term accommodation suites in Spring Hill.

Then in August this year the developer successfully applied for minor changes, dropping to 109 residential units and 96 hotel rooms. Hotel provider Accor had announced the city’s first Movepick Hotel would be housed in one of the two art-deco towers.

Those plans have been cancelled and Keylin’s managing director Louis Cheung said the partners were working on an alternative location for the hotel.

A total of 121 apartments will remain in the single tower, to be known as Oria, on the 3700sq m site fronting Brisbane’s Victoria Park redevelopment. ▲ The south-east Queensland developer says it will now concentrate on the residential element of it's Spring Hill project.

Cheung placed the blame for the cutbacks squarely at the feet of Australia’s construction sector and the immense pressure it is under.

He said rising supply costs and labour shortages were impacting every facet of development nation-wide.

“And in September we spoke with all our purchasers at Oria to inform them of our strategy to safeguard the development during this widespread market volatility.” 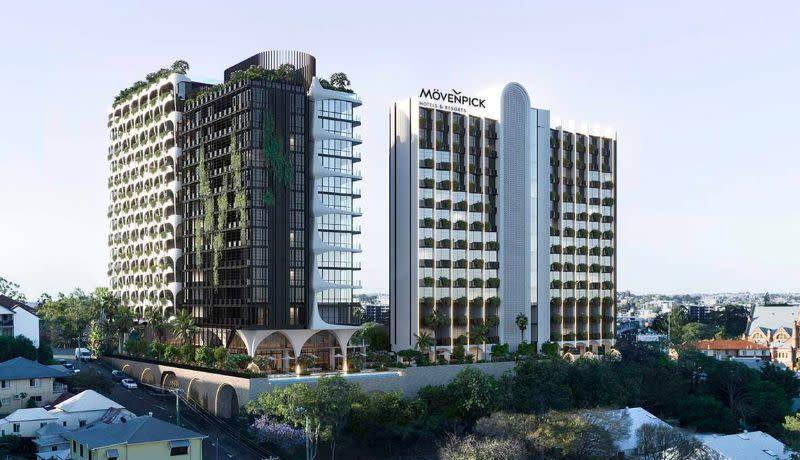 ▲ The original plans had called for a Movenpick hotel to be housed in one of the two art-deco towers. That idea has been shelved.

Keylin has lodged documents seeking more changes, this time removing one of the two buildings while they concentrate on purely residential.

With the second building gone, the revised plans call for the removal of the podium and all food, drink and function facilities, as well as a reconfiguration of basement parking in the remaining MAS Architecture Studio designed-tower.

“The most significant changes include the relocation of the pool to the rooftop to adjoin the other recreation spaces and introducing additional apartments at ground level and on level 14,” Cheung said.

The largely residential developer paid $9.25 million for the L-shaped site at 447 Gregory Terrace in July of 2020. It has frontages of 27m on Gregory Terrace and 78m on Warry Street.

In lodging the change application, Mewing Planning Consultants said the development would continue to make a positive contribution to the vibrancy and activation of the area.

“The development will continue to support the increased community activity, generated by Victoria Park and other facilities,” Mewing Planning said in documents.

When first mooted, Keylin’s hotel plans were part of a mini boom in hotel development in Australia, defying the slow return of the big-spending international travellers.

Keylin said the early works phase of construction was nearing completion and it expected to appoint a builder for the main works phase in 2023.