The global hotel giant will operate the 5-star regional resort under its flagship luxury brand from November.

“We have been looking to grow outside of central Melbourne for some time,” IHG Australasia vice president for development Abhijay Sandilya said.

“To be expanding into regional Victoria with a property of this calibre and in such a prime tourism location is incredibly exciting.

“With regional tourism in places such as the Mornington Peninsula benefiting from pent-up traveller demand due to Covid-19, the hotel is in a sweet spot to capitalise on this influx of travellers, and with very few luxury hotel offerings in the area.”

The consortium, consisting of the Victor Smorgon Group, the Kanat Group and prominent Melbourne developer Trenerry Property Group, took over the stalled project in April last year—paying $14.5 million for the development.

A previous $80-million redevelopment effort came to an abrupt halt in May 2019 when developer Steller, led by Simon Pitard and Nicholas Smedley, collapsed into voluntary administrator, leaving the hotel dangling above a huge excavation hole.

After the acquisition, the consortium appointed Hamilton Marino as builder and Woods Bagot as the architect and interior designer. 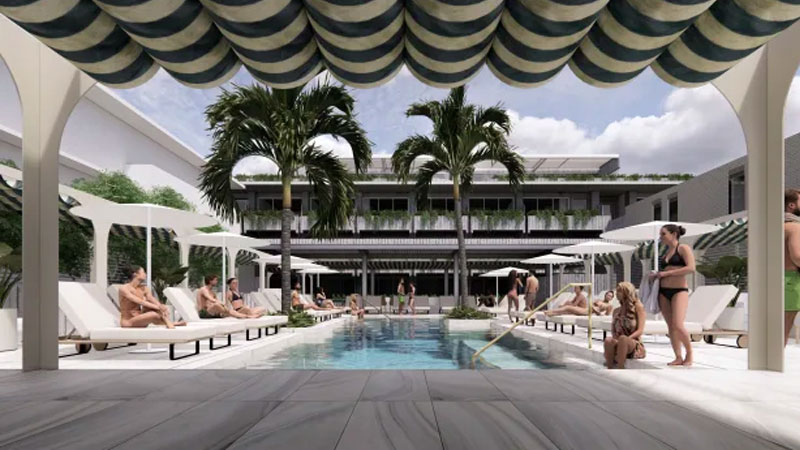 ▲ The InterContinental will include a series of pools and day spa treatment rooms.

“We are excited to see the Hotel Continental enter an exciting new era,” Edwards said.

“Collectively we have a passion and vision for the hotel to be completely revitalised and returned to its former glory as one of the country’s most loved hotels and we’re excited to be embarking on this project with the team at IHG.”

The original hotel, established in 1872, was built by renowned businessman George Coppin in a Victorian Italianate style, using locally quarried limestone in an era when Melburnians were flocking to the affluent seaside town.

IHG said a high-profile chef partnership will soon be announced for the hotel’s signature restaurant,. The property is also home to five other dining and bar outlets.

In addition, the hotel will feature a wellness centre and bathhouse, an outdoor pool, gym and three function and event spaces, including the original grand ballroom.

To bolster the project, the consortium purchased a neighbouring 1088sq m property at 12 Riley Lane which will accommodate additional hotel rooms and add 25 per cent to the total site.