Consumer confidence is improving as a sense of “normalcy” returns—and a rise in retail spending may be due to consumers dipping into the household travel budget, which is dormant due to Covid-19 travel restrictions.

Recovering from April lows, personal retail spending has continued to rise across categories, with very large losses in travel-related and restaurant spending across Australia offset by strong growth in services and grocery spending, ANZ data shows.

"It seems that when we take into account non-retail spending observed by ANZ, much of the uplift in retail spending may be coming from the household travel budget, which is dormant while international [and] interstate borders remain closed and travel restrictions continue as part of lockdown," ANZ economists Adelaide Timbrell and David Plank said.

Some movement-related spending indicates that people are starting to take advantage of gradually-lifting restrictions, with car hire, accommodation, car park and petrol station spending still much lower than May last year, but drifting up. 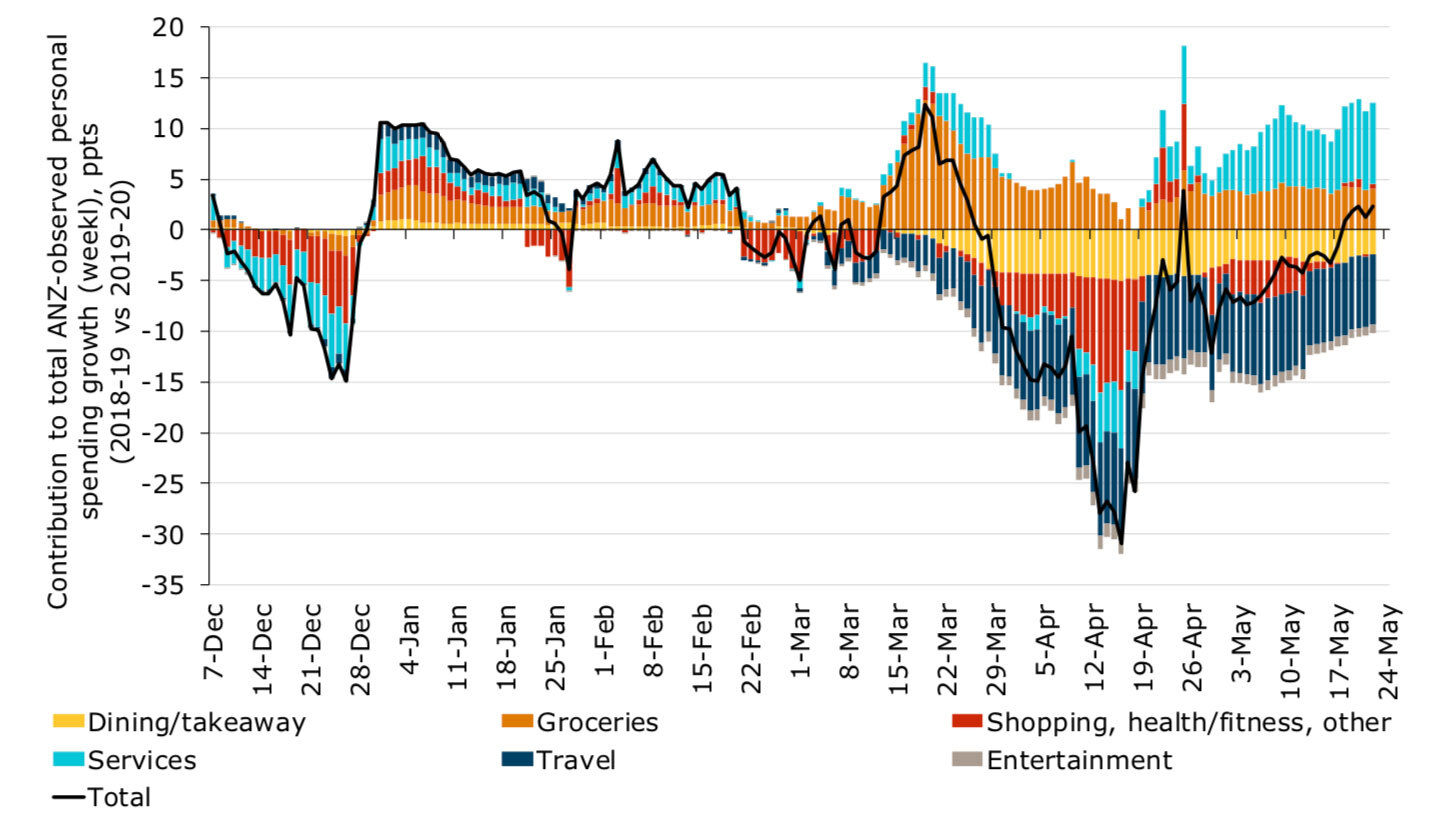 CBA's household card spend data tells a similar story, with spending momentum on an uptrend right throughout May.

Senior economist Ryan Felsman said that after several months of "tightening their belts" and "bunkering down", spending on credit and debit cards by Commonwealth Bank customers continues to pick up.

"Households have been heartened so far by Australia’s success in avoiding a catastrophic outbreak of the pandemic which has tragically taken so many lives globally.

"A semblance of ‘normalcy’ is returning with adherence to social distancing measures enabling some businesses to reopen, the kids to return to school and the footy to resume shortly," Felsman said.

Spending on apparel and footwear is up by 8.3 per cent, perhaps due to a return to work and colder weather, with Felsman noting "retailers are also reporting that younger Aussies are ‘hoovering up’ fashionable sneakers using their Job Keeper ‘income’ and superannuation withdrawal payments".

And while ANZ-Roy Morgan ratings show consumer confidence has improved for eight successive weeks—now up 42 per cent to 92.7 per cent after hitting 65.3 per cent at the height of the pandemic outbreak, its lowest ebb since 1973—sentiment is still below its long-run average of 112.9 points.

"Consumers remain cautious about their finances and worried about the economic outlook due to high unemployment, elevated household mortgage debt and early signs of an easing in property prices," Felsman said, adding that concerns also persist about a potential second wave of coronavirus infections, along with uncertainty about the longevity of government support measures.