Crunch the numbers on high-rise projects popping up across the booming Gold Coast and it’s a wonder the city’s developers are not complaining of chronic sore necks.

It’s not so much the constant craning of their heads to survey their towering creations that would be the cause, but rather the portentous reflex of repeatedly looking over their shoulders.

Given the notoriously volatile reputation of the Gold Coast’s property cycles, who could blame them.

After years out in the cold following the global financial crisis, the city’s development sector has aggressively come back on the boil during the past 18 months, begging two questions: has the latest boom hit its peak and is the Gold Coast about to take another dive?

Truth be told, with borders yet to fully reopen and the global impact of the pandemic still playing out, nobody really knows for sure.

But according to developers and property experts who spoke with The Urban Developer, the market fundamentals are holding strong and there are no signs of an imminent bust or even a significant simmering.

In fact, flying in the face of any instinctive foreboding, there is the very real possibility of a further strengthening in the market.

“When people can get to Queensland again, I think it will accelerate,” Sherpa Property Group chief executive Christie Leet says.

“I imagine there will be an awful lot of people who will choose not to live in Sydney and Melbourne ... and I think we’re just starting to see that and we’re in for a good run going forward.”

Nevertheless, Leet says regardless of the prospect of doubling down on a looming migration tsunami, he is still not prepared to bet the family home on long delivery projects.

He says development site prices nudging $20,000 per square metre and beyond along some areas of the beachfront are “towards the top end, well and truly”.

“There’s a fair argument that we might have hit a peak,” Leet says. “But there’s still plenty of people out there buying tower sites that are going to take three or four years to develop. 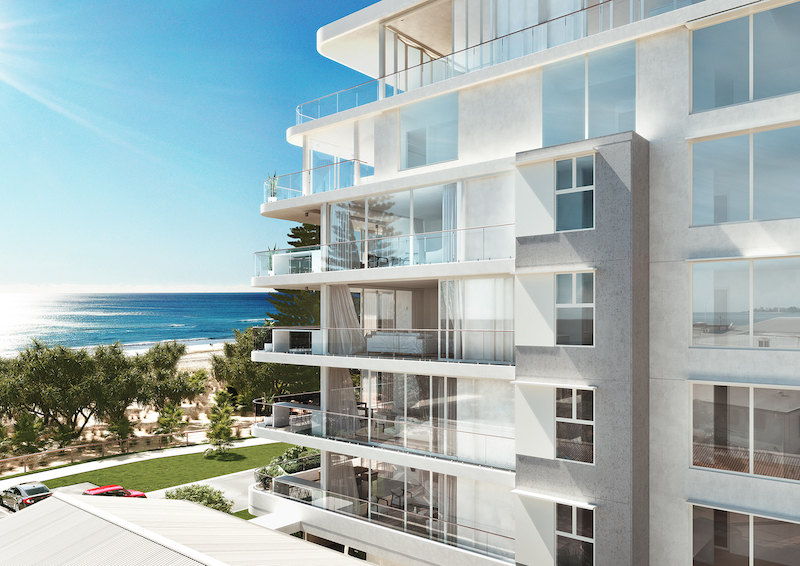 ▲ We’re in for a good run going forward: Sherpa Group’s Christine Leets, whose The Perspective 202 Bilinga, is pictured.

Leet says, however, as a developer—notwithstanding the escalating development costs—the opportunities and value are still there.

“You can still drive up and down a street and say ‘Geez, I’d love to get a hold of that old shack and really do something quite special’.

“We just bought a new site and we’ll probably buy another one before Christmas ... but certainly, from our point of view, we’re a bit risk averse in terms of taking on projects that have more than a two-year delivery cycle.

“We think things will be okay until 2023 and after that there’s still a bit of a question mark ... but if there’s anything that’s going to drive the market past that it’s going to be that net interstate migration and international migration.”

At last count, there were more than 50 residential projects with an estimated investment value of $4.8 billion under construction and with firm pipeline commitments.

In the first three months of this year, approvals ramped up by 33 per cent and the Gold Coast recorded almost $800 million in new apartment sales, just $112 million shy of the total sales in 2020.

But he says unlike previous booms driven by massive investor sprees and developer over-exuberance—ultimately leading to market oversupply— this time around the Gold Coast is “not getting carried away with itself”. 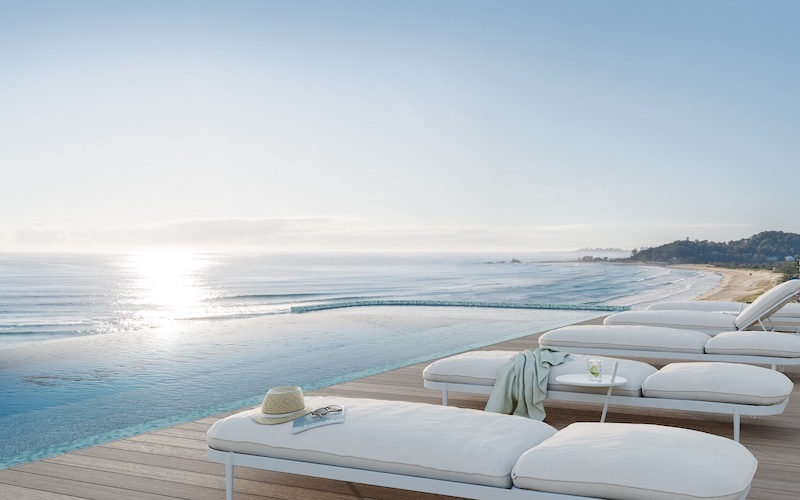 ▲ Lacey Group’s The Monroe at Jefferson Lane in Palm Beach on the southern Gold Coast.

Instead, a seismic paradigm shift in population created by Covid is at play and Witheriff believes it will be the catalyst for “real” and sustained growth.

“The last boom was driven by money being freely thrown around ... it’s not the same now. We are growing because people are moving here from the higher density cities and if they’re not here now they’re planning to be here.”

He likens the city’s pandemic-induced boom to the upshot from Queensland’s abolishment of death taxes in the late 1970s by then-Queensland premier Joh Bjelke-Petersen.

“There was a flood of money and people that came over the border and I suspect this pandemic is going to have the same effect.”

As for the city’s soaring development site prices, Witheriff says: “There’s still value to be had and there’s strong demand and requirement for accommodation—and we haven’t even seen the borders reopen yet”.

“Subject to something globally changing that causes major issues, we should have a period of sustained growth but not silly growth, not out-of-control growth,” he says.

“In 2022, I don’t think we’ll see the price growth that we’ve seen in the last 18 months but we’ll certainly still see population growth and development continuing at a reasonable pace.”

Of the people moving interstate, almost a third have been upping stumps to come to Queensland, ABS data shows.

According to the latest Commonwealth Bank Regional Movers Index—despite Sydney being in lockdown the entire September quarter and Melbourne for two-thirds of it—net migration to regional areas rose by 14 per cent.

The Gold Coast remains the most popular destination, welcoming 11 per cent of all capital city residents who moved to regional areas during the September quarter. 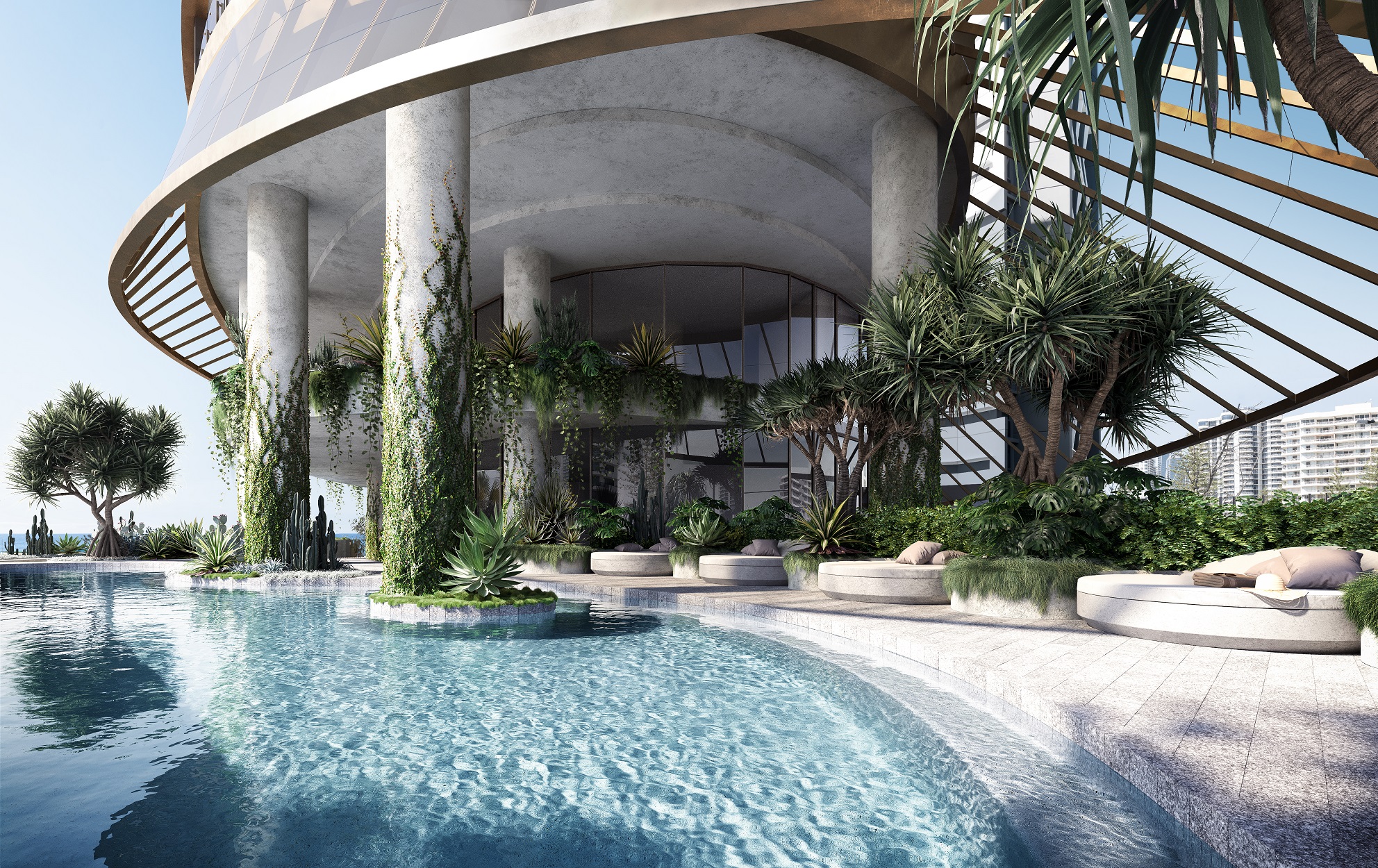 ▲ A render of the pool area at Royale Gold Coast at Northcliffe Terrace.

Witheriff also expects that while most of the development focus so far has been on luxury owner-occupier product, other “markets within the market” will start to get stronger—in particular, the investor market.

Return to affordability on the way

“There has to be a push back to the affordable,” he says. “There is a shortage of accommodation throughout the city. The residential vacancy rate has hit historic lows. We need more apartments and homes than we can currently rent.”

Real Estate Institute of Queensland data indicates the city’s vacancy rate plunged to 0.6 per cent in the March quarter, the lowest level on record.

Lacey Group director Adam Lacey says the “missing middle” will inevitably be on the radar for the city’s development sector going forward.

“Affordability is getting worse and it’s pushing a lot of people out,” he says.

But as he well knows, it is becoming increasingly difficult for development sites to be acquired and for product to be delivered that can feasibly meet that price point.

“We’ve got two projects in delivery mode and are starting to hunt around for more sites to fill the pipeline but acquisitions at the moment are a very challenging scenario.

“It has been pretty much a perfect storm up here and a lot of the southern developers have now got their eyes on the Gold Coast.

“We’ve had a massive influx of those guys and, as you can imagine, more competition has just raised things dramatically ... sites have doubled in price but compared to Sydney and Melbourne they are still cheaper and that’s a huge driver.

“So, at the moment I can’t see anything slowing us down for at least another 12 to 18 months.

“All the buyers we’ve had so far primarily have been buying off-the-plan sight unseen. Once the restrictions are lifted around Christmas time and people can actually get up here and see the properties, and once international borders open up ... it’s just going to be another wave.

“Typically, the Gold Coast has been boom-and-bust and runs that cycle but it feels this time around there’s more substance to it and if there are going to be any adjustments, I don’t think we’re going to see the same sort of highs and lows. 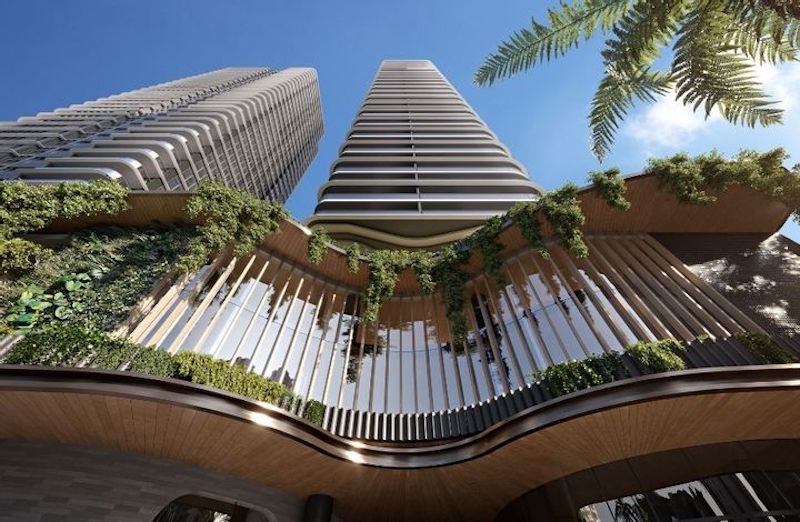 “Also, because of what has been happening globally over the past 18 months I think the Gold Coast is now being taken a bit more seriously as a city. It is becoming a far more attractive proposition to people and they want to do business and live here.”

Urbis Gold Coast director Matthew Schneider says there is also much less volatility in the city’s property market because the scale of the projects is much smaller.

“We’re not in a situation now where the strength of the property market is dependent on a half dozen large-scale projects, each taking four or five years across multiple cycles to build and carrying a much higher value and risk profile.

“That shift to smaller scale projects, to boutique apartments, I think is the reason we’ve seen that volatility come out of the Gold Coast market and a much more stable set of circumstances.

“So, if you look at the drivers of those booms and busts previously it’s hard to see the fingerprints of those forces at the moment—it’s quite a different cycle.”

Schneider says notwithstanding the current strength of the market, the city’s apartment supply is sitting at only four to five months and the 4500 dwellings being delivered per annum across the Gold Coast is still well short of the 6000 dwellings required to meet population forecasts.

“There’s some really positive forces over the foreseeable future,” he says. “We have very strong conditions in terms of demand for product, there are still sites available and, yes, construction costs have escalated but so have sales revenues.

“As well, internal and international borders are only just starting to open up and so, given there is still such strong value on the Gold Coast relative to other markets, we can expect to see demand continue and perhaps even strengthen.

“That, in all likelihood, will get us to mid-decade and by then we should be seeing the Brisbane Olympics shadow starting to cast its positive effect.

“So, if people are looking over their shoulders at the moment it’s really just because of that dark cloud of uncertainty being felt everywhere ... but where there doesn’t seem to be much uncertainty is that there are strong levels of demand on the Gold Coast for the foreseeable future.”