The smell of Vegemite will linger over Fishermans Bend in perpetuity as the City of Melbourne Council heritage lists the Port Melbourne factory.

Bega Cheese, which owns the Vegemite factory, has listed the site for sale with price expectations of about $150 million and plans to lease back the 36,915sq m factory.

It was added to a heritage overlay of Fishermans Bend as part of a broad-sweeping study to protect the region’s industrial past while preparing for accelerated development of the innovation and urban renewal precincts.

In support of the amendment Melbourne deputy lord mayor Nicholas Reece said he supported the heritage overlay amendment which would acknowledge the “intangible heritage” of the Vegemite smell.

“I think we all agree Fishermans Bend is one of the most important parts of Australia in terms of the social and industrial history of the country,” Reece said.

“It’s where the first Holden motor vehicle rolled off the production line and where Vegemite is made.

“This amendment ensures that no matter who owns this site, the intangible heritage of the site (the Vegemite smell) is acknowledged and preserved into the future.”

Fishermans Bend is Australia’s largest urban renewal project, covering about 480ha in the heart of Melbourne.

The council voted to add three properties, including the Kraft factory, to the heritage overlay, which also included an electricity substation on Salmon Street and Shed 21 at 206 Lorimer Street.

The curtilage of Shed 21’s heritage overlay was supported by Samma Property Group, who acquired the 4509sq m site at 194-206 Lorimer Street with Brightlight in November, 2021 from Development Victoria.

The site already had approvals for a 30-storey build-to-rent development—Samma Property Group is reportedly developing a $200-million, 300-apartment project, with another build-to-rent planned for Haig Street at Southbank. 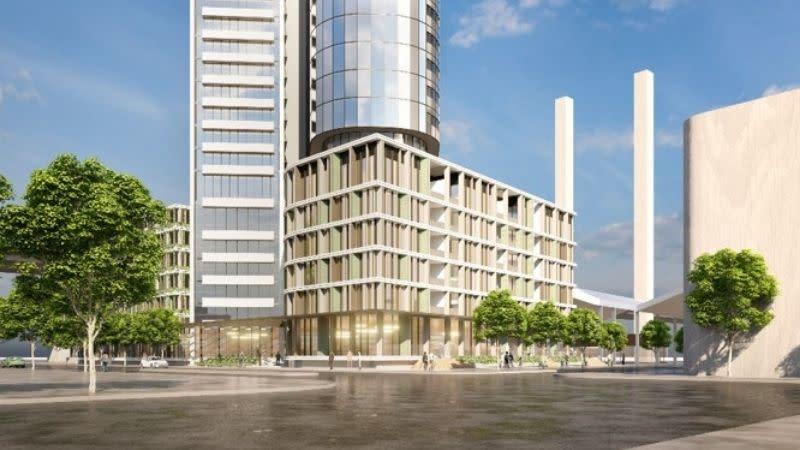 ▲ Samma Property Group supported the heritage overlay and curtilage of Shed 21, which it acquired for a $200-million, build-to-rent project late last year.

The council also nominated the former Government Aircraft Factory at 226 Lorimer Street and the West Gate Bridge to the Victorian Heritage Register.

The 1956 Kraft administration building at 1 Vegemite Way is part of a complex that was built between 1943 and 1967 which, according to council documents, is a “representative example of a postwar food manufacturing plant”.

“The former Kraft factory continues to produce the iconic Australian brand Vegemite from this site,” the report said.

“[These buildings are] important infrastructure which are distinctive in from and can be appreciated from the public realm.”

The Royal Historical Society of Victoria supported the inclusion of the former Kraft factory in heritage overlays for its cultural significance in the Australian identity, while the National Trust said the “distinctive Vegemite smell” should also  be included in the statement of significance for its “intangible cultural heritage”.