The Hills Shire Council has spent $105 million to acquire a major north-west Sydney shopping centre as part of a strategy to better control and manage assets within the municipality.

The council beat out about a dozen other potential buyers to secure the 7900sq m Castle Mall in Terminus Street, Castle Hill last month.

"The purchase of Castle Mall will not only help to boost the council's annual income, but it also means as a landowner you have a much greater ability to determine what happens on property you own, than if you are a tenant,” Edgar said.

“This gives us a legitimacy that can determine an outcome and our future. Remember, this is effectively our CBD.”

The deal was an all-cash offer, approved in a second vote by the council at the beginning of April.

Both Castle Mall and the nearby 112,000sq m Castle Towers property were held jointly by QIC Property Fund and QIC Town Centre Fund.

“At $105 million and a fully leased initial yield of approximately 4.1 per cent, the sale of this asset was a very pleasing result for our investors and QIC,” O’Brien said.

“QIC is always strategically re-assessing its holdings, seeking to position the funds to capture optimal growth and return outcomes for our clients,” he said.

“QIC continues to be focused on activating its retail-anchored mixed-use town centre masterplan for Castle Towers. As Castle Mall does not form part of this masterplan, it was surplus to our needs.”

For the Hills Council, Castle Mall adjoins other key council-owned sites in the area including the Terminus Street car park and the former Castle Hill Day Surgery, which will soon be home to the University of Canberra.

“We don’t know what other people were prepared to pay for it, but when you look at this site, and the value of the other land and assets we own around it, it’s arguably worth a lot more to us than it would be to others,” Edgar said. 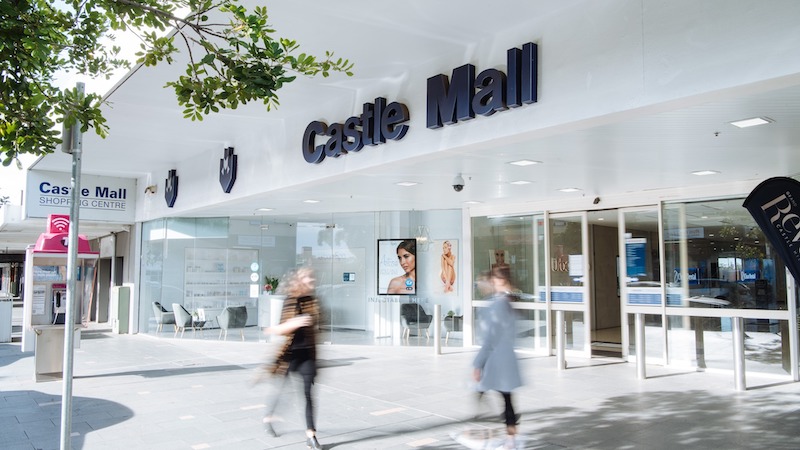 ▲ Castle Mall, now one of The Hills council’s holdings.

He defended the $105-million price tag.

“Don’t for one minute think this council has done this for its own edification,” he said.

“The motivation here is not in self-interest, but rather in future-proofing our council.

“It is not often you find a key site that becomes available in your municipality.  All we have done here was swap cash deposits in the bank for cash investment in property.”

Edgar said that for the foreseeable future the Castle Mall property would remain a shopping centre, but does not rule out further development or even sale.

“This is a key site, very close to a world-class metro station (Castle Hill Metro Station).  It’s booked-ended by a number of our other properties.  What’s on it right now is well below the potential for the site.

“There is big potential for capital growth.”

An all-cash purchase is a far cry from 30 years ago when The Hills Shire was put into administration.

“We’ve gone from being a real basket case to one of the strongest performing municipalities outside Sydney City Council itself. We did that partly through property investment.”

In July this year, Hills will re-open what they are now calling the Waves Fitness and Aquatic Centre, following a $50-million refurbishment, all paid for by the council.

"Many other aquatic centre renewals, such as North Sydney and Bateman’s Bay, have only been able to happen through significant state and federal government funding,” he said.  “We have done this on our own.”

Hills’ rates will account for about 50 per cent of the council revenue this year, while investment revenue is expected to be between 4 and 5 per cent.  Edgar accepts Castle Mall will also produce a similar 4 per cent yield.

“That’s a thin sliver of the slice of the pie, but it all adds up,” he said.

Rates are expected to increase by 0.7 per cent across New South Wales next year—the lowest in 20 years—although the Independent Pricing and Regulatory Tribunal has approved a 1.6 per cent rise in Hills in recognition of the added costs of the municipality’s population growth.