More businesses in the construction sector, already under pressure from stretched supply chains and labour shortages, are expected to go to the wall as the cost of materials and wages exceed manageable levels.

According to credit reporting agency CreditorWatch, the construction sector currently has the worst late payment of any industry with one in 10 builders more than 60 days in arrears on their payment to suppliers.

CreditorWatch chief economist Anneke Thompson said further pain would be inflicted upon construction firms by increases to the cash rate target in order to bring inflation back within the target band of 2 per cent to 3 per cent.

“The irony for the construction sector is that these cost pressures on tender prices are only going to be exacerbated by rising bank funding rates,” Thompson said.

“All developers in the country are exposed in one or another to bank lending rates and with these increasing, and banks also placing an additional risk premium on the sector, we expect there to be further disruption in the sector as some contractors fail to meet their repayments.”

Thompson said higher rates were now a major cause for concern, particularly at the smaller end of the industry.

“Many of the larger construction companies will have hedging facilities as part of their finance, so that will provide some protection for current projects,” Thompson said.

“But it absolutely will change the feasibility of projects going forward from mum and dads renovating houses all the way through to large-scale commercial developments.” 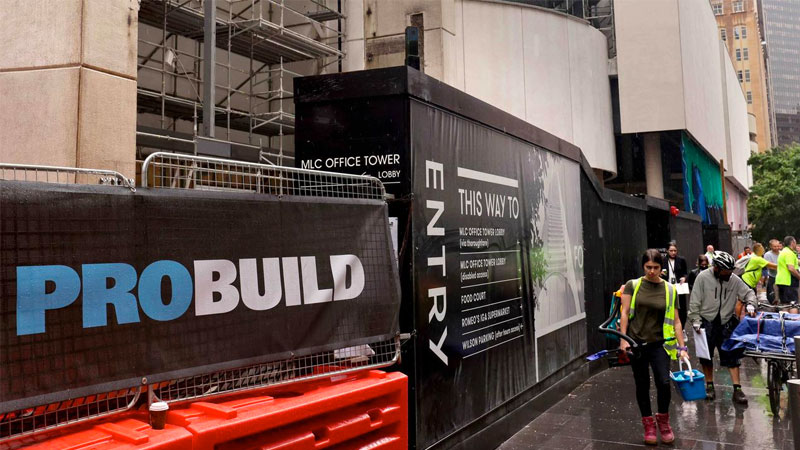 Construction sector insolvencies are now on the rise after a number of high-profile failures including Probuild, which had $5-billion worth of projects, and Gold Coast-based Condev Construction, which had a $1-billion construction pipeline.

CreditorWatch chief executive Patrick Coghlan said the risk now was that construction collapses could cascade through the industry, creating a chain reaction of failed businesses.

“The sector has now been hit by a perfect storm of staff shortages and cost blowouts as inflation surges globally,” Coghlan said.

“Many of these forces, particularly cost rises, are beyond the control of construction companies.

“But construction also has major industry-specific challenges and there are now serious cracks appearing in the construction industry’s credit foundations.”

The federal government implemented temporary relief measures for company directors’ personal liability for insolvent trading in 2020 as well as JobKeeper to prop up businesses throughout the pandemic.

However, outstanding debts to the Australian Taxation Office have since soared by almost a third to $58.8 billion, while over the same time court wind-ups of businesses fell by three-quarters.

“With potential delays, contractors face further pressure with liquidated damages on their doorstep and no recourse for loss and expense for additional time on-site,” Slattery said.

“For those in the supply chain who locked-in prices in previous months and years, they don’t have many options.

“Meanwhile, interest rate hikes will increase the cost of finance, insurance costs are increasing given the highly volatile market and payment timelines across the industry remain poor putting further stress on cash flow.”

Slattery said some larger contractors with greater purchasing power were stockpiling key materials to hedge against rising costs on long-term projects, resulting in an immediate short-term cost premium in exchange for security of supply across the life of the project.

Talking to small- and mid-tier builders, Slattery said those with projects in construction, or about to tender or commence should undertake detailed financial checks to ensure that their supply chain is solvent.

“Nobody should have to wait 60 to 120 days to be paid, yet we accept that as the status quo in the industry,” Slattery said.

“Cash is king, and in these difficult times people should be paid as soon as possible for works completed to maintain liquidity.”

Slattery is now forecasting escalations between 5 and 6 per cent in Queensland for the next 12 months, 4 per cent in Victoria and 4 to 8 per cent in New South Wales.

GM Advisory director Ginette Muller said that increasingly low margins on construction projects had meant that smaller builders and subcontractors were now at greater risk of default, along with a small pocket of larger entities.

“It is at the end that the majority of the job’s profit is actually realised—so funding and carrying costs incurred, especially if they are rising rapidly, can significantly impact the profitability of the subcontractor or builder,” Muller said.

“CreditorWatch sees problems [for construction companies] in south-western areas of Brisbane and the Gold Coast, and in Western Sydney and it is consistent with what I’m hearing.”

Melbourne, Canberra, Adelaide and Darwin have stable expected increases while significant surges in tender pricing have been experienced in Brisbane, Perth and Sydney.

Last year, the price of materials increased in particular for concrete, steel, reinforcement, timber and PVC-based products used in hydraulic and electrical trades, as well as record high prices for raw materials, such as copper and iron ore.

RLB expects general escalation to remain relatively stable, with cost increases lower than 3.5 per cent expected in most cities.