Next weekend is shaping up to be a litmus test for Australia’s property market with more than 2700 auctions scheduled across the nation.

So far buyer take-up has remained in step with supply with 83 per cent of the 2232 properties sold at auction nationally last weekend. But this weekend auctions markets will be tested across substantially higher volumes, according to Corelogic’s Tim Lawless.

“[This] will be the most auctions held since the first week of April last year when 3209 auctions were held. The large number of auctions will provide a timely test for the depth of housing demand,” Lawless said.

“Prospective buyers could be more thinly spread with so many auctions being held, potentially dampening the clearance rate.

“I’m expecting the results will remain strong, but potentially come in slightly lower relative to the previous weeks where the weighted average clearance rate across the capital cities has held around the 80 per cent mark for most of the year to date.”

Lawless said the low supply of advertised housing set against strong buyer demand had created urgency among homeseekers but that it would slow down over the coming months.

“We are expecting affordability constraints together with a wind-back of incentives and a lift in overall advertised stock levels will contribute to a slowing of housing market exuberance,” he said.

Last weekend Canberra was the best performing market with 95 per cent of properties sold at auction. Clearance rates have continued their upwards trajectory from an all-time low during lockdown last year, this week reaching highs not seen since 2015. 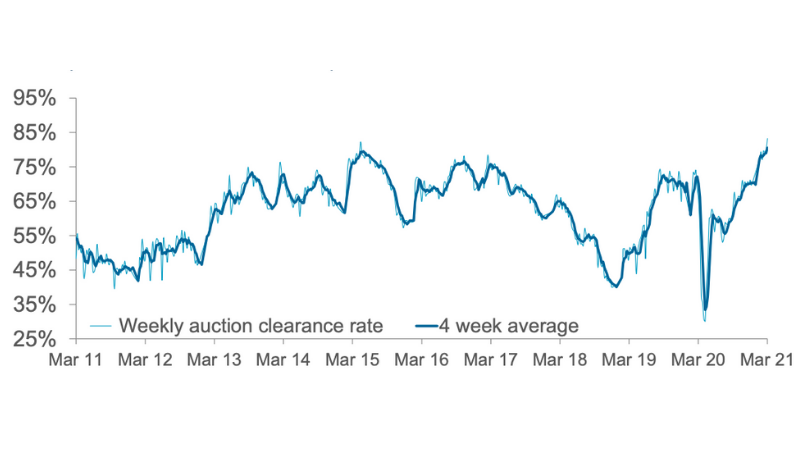 New home sales have also surged ahead with the Housing Industry Association reporting a 1.7 per cent growth on sales for the same time last year.

“Sales in the three months to February 2021 were higher by 60.5 per cent than in the same three months the previous year,” HIA economist Angela Lillicrap said.

“This strong result reflects the significant impact of HomeBuilder on demand for detached housing.

“HomeBuilder was the catalyst for improving consumer confidence in the housing market.

Lillicrap said they were anticipating another surge in new house sales at the end of this month, but not to the same heights as December 2020.

Federal Minister for Housing Michael Sukkar said the extension of the HomeBuilder scheme to the end of this month had been key to maintaining momentum in the construction sector.

“HomeBuilder has delivered a secure pipeline of construction work that will keep hundreds of thousands of tradies in work who would have otherwise been facing the unemployment queue,” Sukkar said.

“The extension of HomeBuilder…also ensures there will be a steady pipeline of construction activity through to 2022.”