Zapari Consolidated Holdings, previously known as Eclipse Pastoral, is scheduled to start construction on the Cox Architects-designed 16-storey building, The Shard, in August.

The project has an estimated end value of $250 million and received planning approval earlier this year.

The building will have a curved facade on the street corner but will have other facades angled towards the urban centre.

It will have a floor area of 30,274sq m with retail space for residents to enjoy with amenities including rooftop gardens, piano room, a yoga and pilates room and a wellness studio with a cold plunge pool and sauna.

The 2480sq m site is at the corner of Brewer and Corinna streets at Woden, opposite Westfield Woden about 10km from the Canberra CBD.

It is also near the Department of Health, the Hellenic Club of Woden, Hoyts Woden, and future light rail stops.

Zapari has sold 80 per cent of the units, breaking sales records for Woden for one-to-five-bedroom apartments. 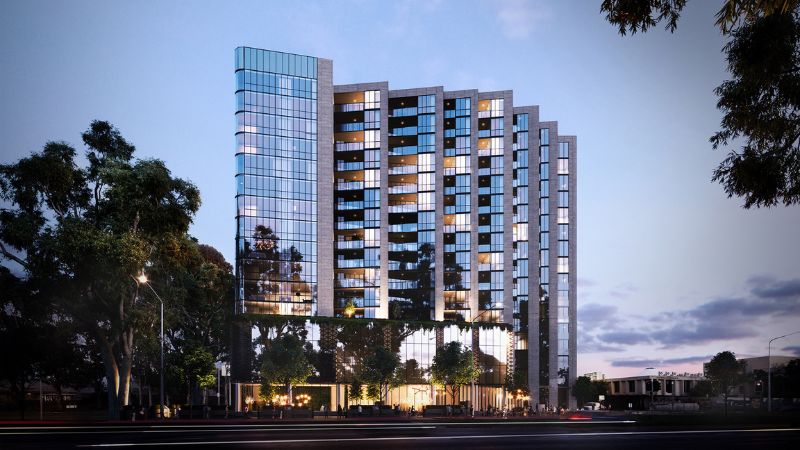 ▲ Zapari is scheduled to start construction on the Cox Architects-designed 16-storey building, The Shard, in August.

Zapari general manager of developments Nathan Ross said a custom penthouse had also sold for $3.5 million and there was still interest.

“There has been no downturn in the market or in sales even with the increase in interest rates,” Ross said.

“The Canberra market is strong with many downsizers looking to relocate to three to two-bedroom apartments with a high level of inclusion.”

Out of the total sales, 90 per cent of the buyers lived locally.

Zapari finalised the acquisition of the site in July 2020 for a total of $11.5 million in a deal brokered by Civium.

Other projects that Zapari have developed include the recently topped-out 129-unit Molonglo Falls at Coombs in Molonglo Valley, the 431-unit Grand Central Towers above the redeveloped Woden Town Centre and 4.5-star The Sebel Hotel in the former Eclipse House in the Canberra CBD.

Completion for Molonglo Falls is scheduled for the end of this year with owners scheduled to move in during early 2023.

Zapari is working on a pipeline of more than 2000 luxury apartments.