Michael Power had a problem.

He needed ox hair, lots of it. But there hadn’t been oxen, or bullocks, in any great numbers in downtown Hobart for 120 years.

He could have substituted horsehair—he liked to keep a couple of bags of it around, just in case—but he didn’t have nearly enough, he realised as he apraised the challenge ahead at the heritage site.

“It’s easy enough to find and I’ve got a couple of people who supply me, but I wouldn't have had enough for this job. People just throw it out.

He thought about goat hair, which he’d imported from the United Kingdom in the past, but when he phoned his supplier they had run out. And in any case, last time there had been all that trouble with the Australian Border Force. He hadn’t seen his goat hair for weeks.

Meanwhile, about 15m away and up on the roof of the same building, James Barker and son Django were facing their own challenges.

It is possible to purchase the 40mm copper clouts they wanted in Australia, but not in the volume they needed. They eventually found the nails in Belgium—all 40,000 of them.

“Yeah, pretty much all of the materials, the copper rivets, all the fixings that we use, everything’s either out of Europe or the US,” Barker says. 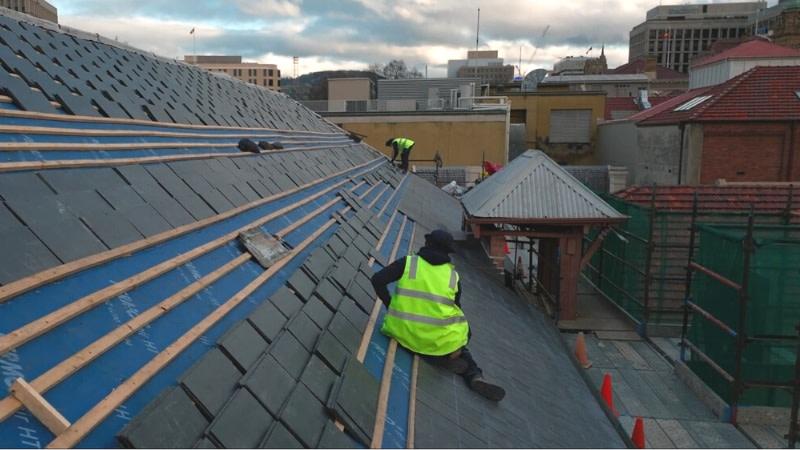 Barker is a roofing plumber by trade and Power a solid plasterer. Together, they are heritage tradespeople—highly skilled in an increasingly small world—and their challenges for this latest job are not just sourcing materials, but the sheer numbers involved.

Those copper clouts were needed to secure 22,000 slates to about 3500m of battening across more than 600sq m of roof. And don’t forget almost three tonnes of lead for the ridging, valleys and box gutters.

In the middle of next month, the two men and their teams will finish the job renovating key elements of Hobart’s Tasmanian Museum and Gallery (TMAG) which safeguards about 800,000 objects as diverse as fossils and fine art.

Australia’s second-oldest museum began life in the 1820s as a warehouse storing supplies for the Van Diemen’s Land colony, including dry goods such as grain and bonded goods including tobacco and spirits.

For a while it housed the country’s oldest scientific society, the Royal Society of Tasmania.

Fast forward 200 years when in April commercial builders Hansen Yuncken won a $2.5-million tender from the Tasmanian government to replace the slate roof of the bond store and re-render the exterior to preserve the historic brickwork.

“For us this job is a complete change from the status quo,” project manager Alexander Swift says.

“A typical construction for Hansen Yuncken is complex, concrete and structural steel, big… that’s our bread and butter.

“But this is about slowing down and trying to understand how things would have been done previously. Trying to understand their methods, really delving deep into detail, leveraging off our specialist tradespeople and then trying to facilitate works so they can best do their artistry.” 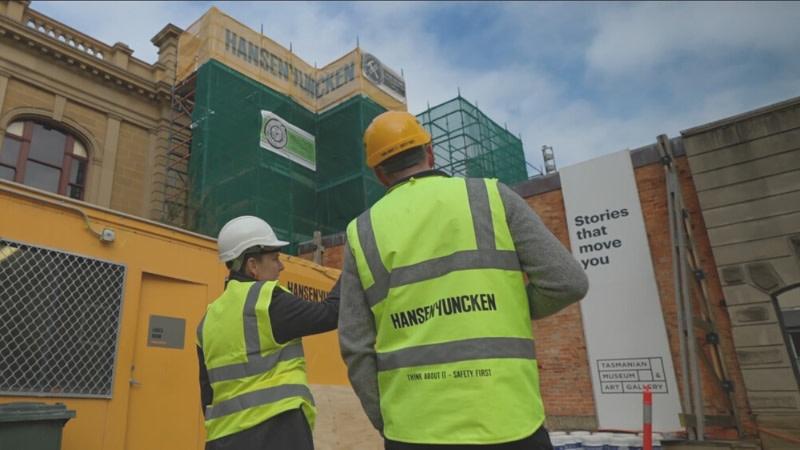 Lucy Burke-Smith, an associate partner with Purcell architects and heritage consultants, says the origins of the job go back to 2018, when Purcell was called in to address some rising damp and salt attack issues within the walls of the bond store.

And then the rain came. On May 11 that year, more than 200mm fell on Hobart, much of it in one six-hour period.

The extreme flooding caused movement in the historic Watergate wall, a brick-and-stone structure with a centrally positioned entrance built in 1826 to connect the bond store to the adjacent commissariat building.

“So the package [of work] really got extended at that point, not only to deal with the bond store, but the imminent risk of a potential collapse of the Watergate wall, which is an incredibly significant feature,” said Burke-Smith.

Hansen Yuncken has something of a track record with complex heritage projects in Tasmania, including the Port Arthur penitentiary precinct conservation program and, more recently, the Hobart’s Anglesea Barracks, the oldest Australian army barracks still in use.

“Those projects sort of opened my eyes to this heritage world and allowed me to embrace the skills and the sensitivities and sympathies that are required to undertake this sort of work,” Swift said.

He, Burke-Smith, Power and Barker have worked together before, on a variety of heritage projects. The respect for each other is clear.

“It’s one thing to be able to scope and specify and nominate the schedule of work,” says Burke-Smith, “but one of the challenges that I think that the contractors face in delivering this, is how to program it all.

“So for example, if you take quite simply just the preparation of some of the lime mortars that are used in conservation projects like this, it’s not something that you typically buy off the shelf, when we’re looking to gather all of the components.” 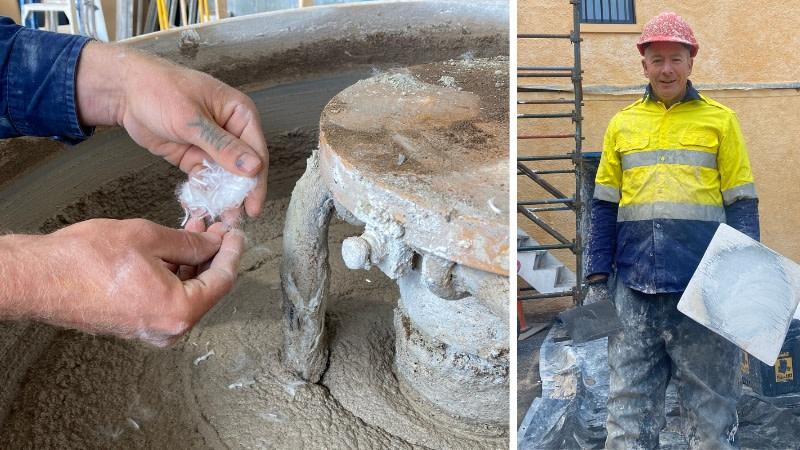 ▲ Solid plasterer Michael Power and fibre is mixed with the plaster for the heritage restoration.

Power, a 60-year-old Irishman from County Waterford, imported sand from Newcastle in New South Wales, where he’d spent his first years in Australia.

“Newcastle has this very good stuff called Rosebrook sand. And I got that for a couple of reasons, it’s well graded and it’s clean. And I suppose I had an opportunity with a job of this size and I wanted to work within a setting that I was comfortable with.

The convicts, he says, probably used silt from the river, which 200 years ago would have come right up to the building’s edge.

“They didn't have the opportunity to go around and source all the good sands like we had. Which could be why the render hasn’t lasted.” 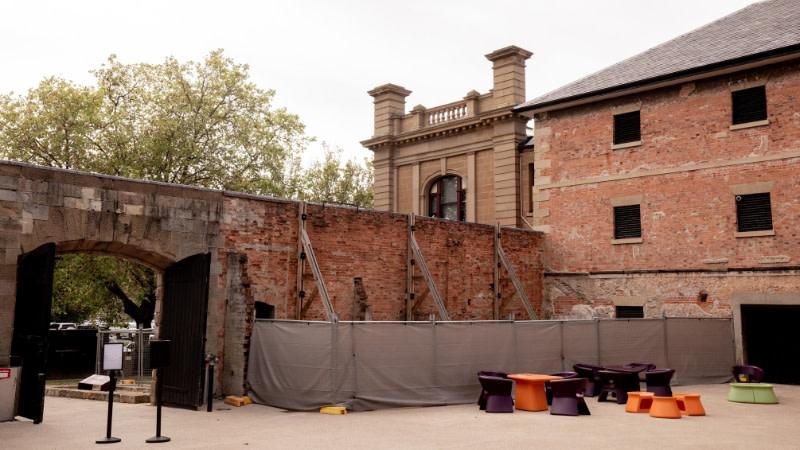 ▲ The Watergate wall and bond store at the Hobart museum and gallery precinct.

Power says he spent a lot of time asking himself: “What would they have done?”.

Back on the roof, James Barker had wanted Welsh slate—produced in the giant Penrhyn quarry since the 13th century and highly regarded for the consistency of its colour and texture.

Heritage architect Burke-Smith says it was commonly used in early Australian roof construction, first arriving in the colonies as ballast in the hulls of trading ships.

But Barker found it was impossible to get.

“I’m sure if we were in Europe, we might be able to get it,” he said.  “But the quarries are running short of it in Wales. And we’re at the bottom of the world.

“I got a generic email from my supplier probably two months ago, begging us to stop asking when it was going to be coming back online. There is none in Australia.”

He chose Spanish Del Carmen slate from the Cabrera Mountains of north-west Spain, instead.

And got on with the job of looking for copper rivets with a star-shaped head (most in Australia are hexagonal) and a rubber grommet to waterproof the fastening.  Again, he found them in Belgium, where there’s an unbroken tradition of slate rooves and copper fixtures.

He says it has been a great job.

“It was certainly an enjoyable job for us. And very, very challenging. But those two things go hand in hand—if it’s challenging, we enjoy it more. So yeah, from our point of view, it’s been a lot of fun.”

Both tradies say there’s no shortage of heritage work and are booked until mid-2024. Each is doing his part to ensure their disappearing skills survive a little longer. 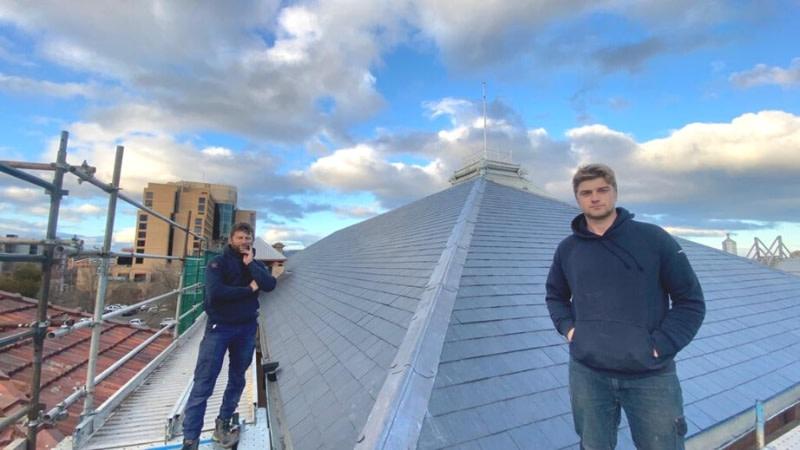 ▲ James and son Django’s trade is not one for those with a fear of heights.

Barker, whose grandfather owned a quarry in the Beqaa Valley in eastern Lebanon, has apprenticed his 20-year-old son who becomes the fourth generation to work stone and slate.

“He’s really embracing it, which is great. It was part of the deal for me to take him on as an apprentice. It was really important for me that he was making his own path.”

Power boasts he has the only solid plastering apprentice in Tasmania, although he has to send him to Victoria to complete his TAFE component.

Earlier in the year the two spent three months preparing the mix of three parts sand to one part of lime putty, which then sat under water in sealed containers to cure. While he waited Power experimented with iron sulfate through limewashes—just the way convicts would have done it—to try to replicate the original orange colour. It would have been easier to use an oxide, but he says oxides tend to fade.

And he searched for 1000 hand-made, replacement bricks, soft enough so as not to disturb the original bricks they’d be resting against in Watergate wall. He found a man in South Australia who makes five or six bricks a day, and who agreed to produce a mix of three different sizes, because no two convict bricks are exactly the same size and shape.

And he looked for animal hair.

“In the end we used a manufactured hair, polypropylene. Obviously that’s not heritage, but we just couldn’t get enough animal hair,” he concedes.

And it’s an honest alternative to teams of bullocks grazing the waterfront at Sandy Bay.

Main image of the museum courtyard by John Gollings AM
gollings.com.au johngollings.com