Australia is lagging in the global race to build a new generation of sustainable infrastructure but is set to make its move from the back of the field.

“Europe is way ahead of us,” Wagner Corporation chairman John Wagner told attendees at The Urban Developer’s Urbanity conference on the Gold Coast.

“Up until the past few years not too many people here really took too much notice of that whole carbon neutrality thing.

“It’s now going to be mandated … and we’ve got an opportunity to be a world leader but we need to have the political will and will of the people to actually get there.”

As an example of Australia’s back-of-the-field form in the sustainable infrastructure stakes, Wagner—who is also director of ASX-listed construction materials producer Wagners—said the company’s Earth-Friendly Concrete product had been rejected locally but was being used in major projects overseas.

But he said for every cubic metre of the cement-free concrete used “you save between 300kg and 400kg of carbon” and in the construction of Toowoomba’s Wellcamp Airport about 6600 tonnes of carbon was saved. 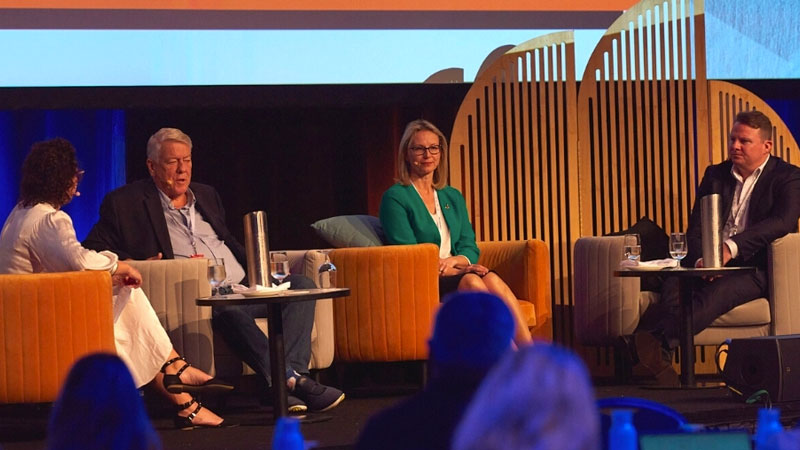 ▲ John Wagner along with Ainsley Simpson of the Infrastructure Sustainability Council and Andrew Walsh, executive general manager of NBN.

“We tried to get the Queensland government to use it on Cross River Rail and the politicians were all in favour of it but for the engineers it was all too hard.

“Yet we’re supplying to the London Underground and to all these industries in Europe but Australia just can’t get its head around it.”

Infrastructure Sustainability Council chief executive Ainsley Simpson said the momentum for change “needs to be even more systemic than just having political will”.

“We need the policy to back it and that policy has to be applied consistently without exception … and then we need to have rigorous planning protocols about what kind of outcomes we’re actually baking-in and that’s only possible if you think about an asset’s whole-of-life.

“It’s not helpful if you only think about the construction phase or the operational phase.

“Our procurement strategies need to change and that's public sector and private sector.

“This is actually a shared responsibility and every single part of the supply chain has a role to play.”

“My view is it should be granular and tackle the material issues to that specific subcontactor and not try to be everything for everyone because it's just not fair on the supply chain.”

Wagner, however, said: “The reality is if it's not mandated builders will take the easy way out because they’re focused on their shareholders and short-term profits.

“We've just got to be careful we don't just let these people loose.

“Contractors, and we work with them every single day, will take the path of least resistance.

“So, if we’re going to think that they're going to do the right thing and be good corporate citizens, we’re kidding ourselves.”

Simpson then interjected: “John, I'm just going to step in for all of my construction members who might be in the room because there are a number of them who are already doing great things.

“But you're right, the culture in construction is that you get what you ask for.

“So, if you want the outcome you need to make its clear that’s the expectation from the get-go and don't vary from that,” she said.

“And if those kinds of specifications aren’t in your contracts you need to be asking if not, why not.

“Adding carbon to the equation, or sustainability in its broader sense, needs to be specified.”