Melbourne’s Bourke Street shopping precinct is being “re-lifed” by a post-pandemic resurgence in development led by a luxury retail boom as cashed-up consumers splurge lockdown savings on the finer things in life.

The luxe retail revival comes as foot traffic numbers are bouncing back in what was dubbed a ghost town when the Victorian capital became the world’s most locked-down city during Covid.

But although the city's retail industry has been dramatically disrupted over the past couple of years, investment in the sector overall has continued at a relatively high level—accounting for about 20 per cent of all volumes.

In a bid to shake off any prevailing uncertainty CBD landlords are now repositioning assets, increasingly to tap into the pandemic-era consumer penchant for upmarket goods and services.

The surge in spending on high-end retail, food and beverage experiences has come off the back of Australian households saving an average of almost 18 per cent of income during the pandemic, putting away an estimated $260 billion.

Strong demand from luxury retailers to grow their bricks and mortar footprints in prized shopping precincts is also playing a key part in landlords plans to breathe new life into their assets with next-level designs.

One of the latest Bourke Street retail properties earmarked for a major revamp is the historic Tivoli Arcade. ▲ The increasing demand for high-end retail has helped drive the planned revamp of the Tivoli Arcade.

Part of a $25-million revitalisation of 235-251 Bourke Street by Sydney-based Futuro Capital, the refurbishment plan is focused on a “premium” repositioning of the arcade.

It will also incorporate the city’s “unique laneway DNA” with an improved internal link between Bourke Street and Rainbow Alley to activate the underutilised public thoroughfare.

Futuro Capital acquired the Tivoli Arcade, retail shops and car park last year in a $73-million deal, giving it control over the entire tower after its $133-million purchase in 2020 of RMIT University’s 14-storey strata stake in the asset.

Tivoli Arcade will be integrated with the tower’s commercial lobby—adding to its allure for high street retail and upscale food and beverage offerings—as part of its transformation into an A-grade asset.

The redevelopment, designed in partnership with architects Bates Smart, is slated for completion in 2023. It is part of Futuro’s three-year capital expenditure program to reposition the building while it continues to be operational.

Futuro Capital executive director Ben Hopkins said it was expected the arcade would be fully leased prior to the end of construction.

“We’re already seeing an extensive amount of enquiry from retail and food and beverage tenants, drawn to the building’s attractive location, the expansive new commercial entrance and the upmarket retail offering through Rainbow Alley,” he said. ▲ A render of part of the planned upscale revamp of 235-251 Bourke Street—the refurbished Tivoli Arcade will be integrated with the tower’s commercial lobby.

Fender Katsalidis principal Rosie Morley said the challenge set by Futuro to “re-life” the aged asset into a premium commercial destination presented an opportunity to “restore the cultural currency of a historically significant site”.

The mid-century building’s ground floor arcade takes its name from the Tivoli Theatre, which occupied the site and was demolished after a fire in the late 1960s.

“We have embraced the laneway as an opportunity to increase connection with the ground floor plane through a physical linkage,” Morley said.

“Our approach has been to strip back the layers of materiality which have been added over time to reveal more of the building’s existing structure.

“The intention is to celebrate this original character and tie it into the fabric of Melbourne’s unique laneway DNA.”

Connections at various levels will be introduced with double-height volumes, including an outdoor terrace on the third floor.

Melbourne Lord Mayor Sally Capp said the project showed a huge vote of confidence in the future of the city centre that was dubbed a “ghost town” during the pandemic lockdowns. 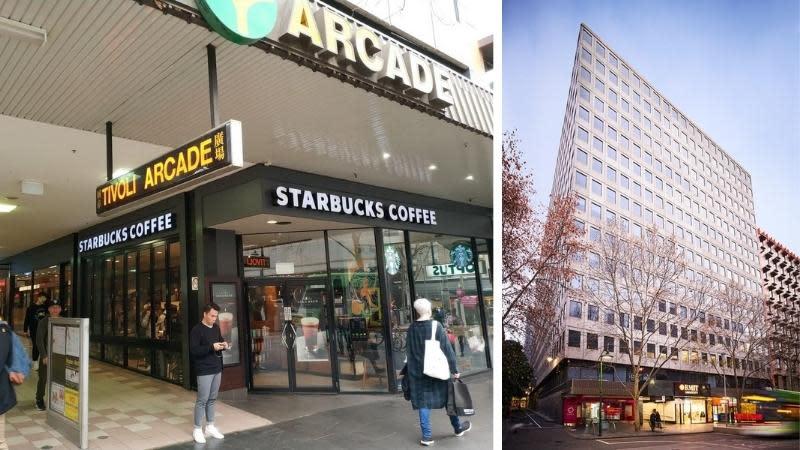 ▲ The Tivoli Arcade at 235-251 Bourke Street: the property will undergo a $25-million revitalisation by owners Futuro Capital.

“Melbourne’s architectural landscape is renowned the world over for our beautifully crafted buildings and inimitable laneways,” she said.

“As we continue our sustained economic bounce back, it is thoughtful and quality additions to our CBD such as this project … that maintain our reputation as the most livable city in Australia.”

The $200-million rejuvenation plans include an expansion topping the precinct with 450 hotel rooms across two properties—a 180-room Hotel Indigo and 270-room Holiday Inn—along with a public rooftop bar and private gym for guests.

Below, across three levels, Melbourne Walk will bolster the retail offering of one of the city’s busiest shopping precincts, with high-exposure frontages expected to draw international flagship and high-end concept stores.

The luxury shopping boom also has led to a resurgence at major shopping centres.

In announcing its 2022 financial year results, shopping centre landlord Vicinity Centres—owner of Emporium Melbourne and Chadstone Shopping Centre—recently indicated that while customer visitation was improving but still only 75 per cent of pre-Covid levels, the average amount spent by each shopper had risen by 30 per cent.

According to chief executive Grant Kelley, luxury sales—jumping 30 per cent on an annual basis across the group’s portfolio—had emerged as a key driver of a strong recovery in retail activity.

“After prolonged lockdowns in our two largest states of NSW and Victoria in the first half of the 2022 financial year, the retail sector has enjoyed a sustained rebound in retail sales and importantly, retailer confidence,” he said.

Vicinity is progressing its $2.9-billion retail and mixed-use development pipeline. It includes projects in Chadstone, Richmond and Box Hill in Victoria as well as Chatswood and Bankstown in NSW and Buranda in Queensland.

It forecasts its development capital expenditure will increase to $200-$250 million in the 2023 financial year.