How $113bn in Government Project Spending is Divided

Government projects are the bedrock of construction in times of turmoil and uncertainty, providing additional opportunities and security to construction stakeholders.

Across the education, health, legal and military, and residential sectors, there are 3054 government-owned active projects, totalling $A113.21 billion.

Australia’s education sector has the largest number of active projects at 1597.

Government-owned projects in the residential sector have the greatest value with a total of $35.47 billion, representing just under a third of the total value of projects across all the selected categories.

BCI Central chief research and data officer Michelle Aizenberg said that aftershocks of the pandemic continued to shake the design and building sectors.

“Revenue losses, skilled staff shortages, long supply lead times and exploding material costs have seen the collapse of a prolific number of builders and developers, with the impact felt by all associated companies.

“All these factors are also making banks more nervous about construction loans, further narrowing and lengthening the pipeline. In these circumstances, government-backed projects provide additional certainty.”

Powered by BCI Central’s historical construction data, Analytix provides users with seven dashboards designed for construction-centric strategic planning and market analysis. Analytix’s State of the Market dashboard was used to provide this snapshot of active government projects within the construction industry as it is today, filtered by sector, stage and location.

Information utilised in this article is current as of August 1, 2022. All values are in Australian dollars. 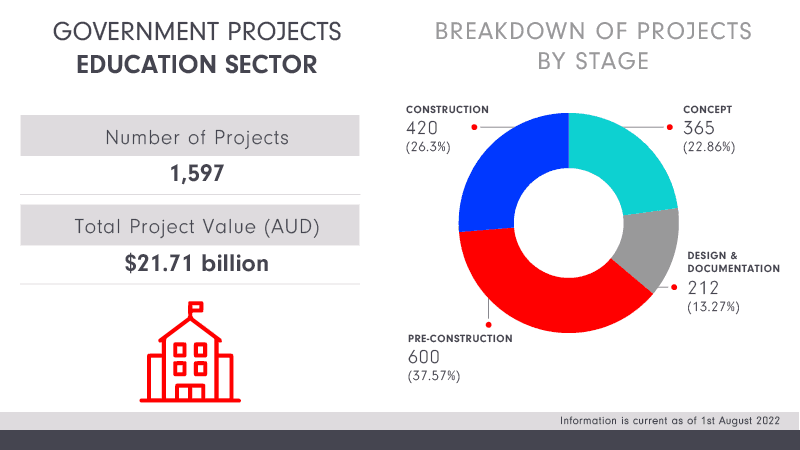 Over a third (37.57 per cent) of the education sector’s projects are in the pre-construction stage, with expressions of interest being made, tenders being called and closed, and contracts being awarded.

The number of active projects in the health sector sits at 431, with a total value of close to $27 billion. The average value of each project—inclusive of aged care facilities, hospitals, medical centres, nursing homes and veterinary clinics—is $62.39 million.

The greatest number of projects (130) are located in Queensland, while the smallest number (9) can be found in the ACT.

Just over a quarter (26.68 per cent) of these health sector projects are still in the early planning stage of their development; a very similar number (26.22 per cent) of active projects are under construction. 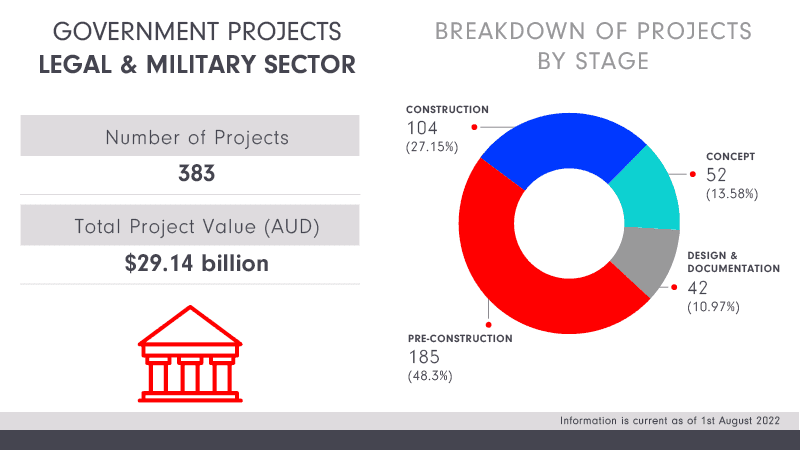 The legal and military sector has the smallest number of active government-owned projects in Australia in this sector comparison, yet has the second largest total value of $29.14 billion. These projects include law courts, military housing, military facilities, police stations and prisons.

The majority of these legal and military projects are in the pre-construction stage, with tenders being called and closed and builders being appointed.

Aizenberg said, “Military facilities are not often discussed in regards to the general construction sector but we can see that they have been a significant component in the work of many of Australia’s top builders and the current pipeline reflects major investment across the country.

“All the same, one of the biggest defence projects is being led by the US government in the NT and there are questions about how directly the investment will benefit the Australian construction sector and local population.

“The remote location and stringent US contractor standards have led to the awarding of many major contracts to US contractors.” The clear majority of projects in number and value can be found in NSW, with 128 projects and a total project value of over $16 billion.

Residential projects at this time are mainly in the design and documentation stage, where plans and documentation are in progress and the appropriate certificates and approvals are being submitted and granted.

BCI Central is a leading provider of construction data and software solutions, powering platforms including LeadManager, Analytix and Archify. Established in 1998, BCI Central has decades of experience in supporting users in identifying sales opportunities, making informed decisions and connecting with key target markets to ultimately drive productivity, profit and growth.

The Urban Developer is proud to partner with BCI to deliver this article to you. In doing so, we can continue to publish our daily news, information, insights and opinion to you, our valued readers.