[+] Doomed to Fail: Inside the Probuild Collapse

“Our guys over there misinterpreted the specifications and the pricing.”

Quite the understated admission, as it turns out.

They did, but it took the South African parent of Australian construction giant Probuild another three years and it was a costly lesson that it concedes “significantly depleted the resources of the group”.

WBHO injected more than $180 million into propping up the Australian arm of its business.

Probuild recorded operating losses of more than $100 million in 2020 and although these had reduced to around $35 million last year, it was too little too late.

With the decision by WBHO to finally turn off its financial life support and call in administrators, subcontractors and suppliers across Probuild’s 18-project workbook are now bracing to bear the brunt of its collapse and potentially be left hundreds of millions of dollars out of pocket.

WBHO has cited the impact of the Australian government’s “hardline approach of managing Covid-19"—particularly on its project delivery capability—as one of the key factors in Probuild’s demise.

But in the unwinnable race to the bottom of Australia’s pressure-cooker high risk, low margin construction industry, Probuild had cemented a reputation as an unenviable frontrunner. 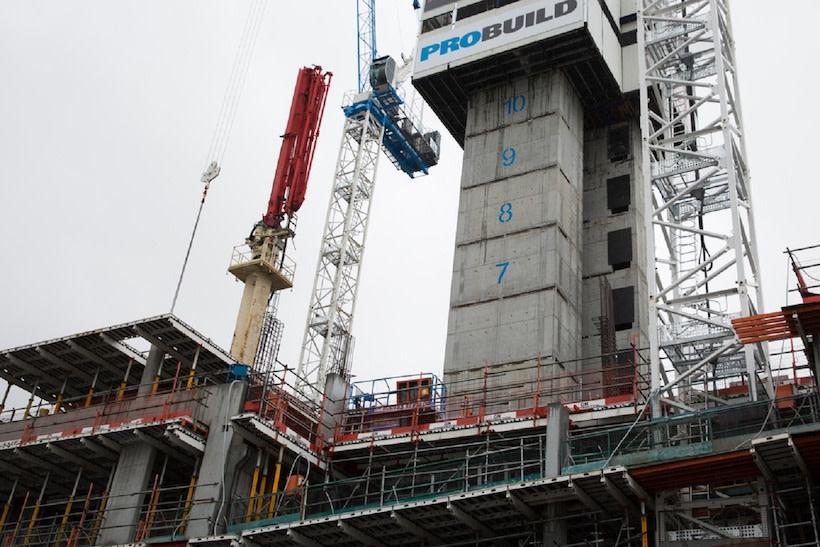 ▲ Many in the sector had grave concerns about Probuild's future over its tendering.

Undercutting rivals by tens of millions of dollars and squeezing project delivery timeframes—on at least one occasion, by as much as a year less than its nearest competitor—on tenders for major developments, it was a company deemed within the industry to be on the road to ruin.

“They were miles under us and we knew at that stage they didn’t know what they were doing because it just couldn’t be done for the money or in the timeframe,” was the blunt assessment of a high-profile industry executive from one of Probuild’s rivals who spoke with The Urban Developer.

“It was the behaviour of a company that wasn’t going to be around for too much longer … and, finally, they’ve come a cropper.”

Probuild’s precarious position first surfaced in 2018-19 with the Western Roads Upgrade in Victoria—the project involving upgrades to eight roads in Melbourne’s western suburbs that WBHO’s then retiring chairman Mike Wylie was referring to in the television interview, conceding the company “misinterpreted the specifications and pricing”.

It led to a 56 per cent plunge in the construction group’s overall operating profits, with the cost overruns offsetting gains from its African and UK operations.

Nevertheless, Wylie optimistically predicted in the interview: “We’ll be finished that contract by about September [2020] and then it will all be positive again from there”. ▲ Construction work under way on 433 Queen Street, Brisbane in November, 2019.

Not quite—less than a year later Wylie’s successor Louwtjie Nel would describe it as WBHO’s “biggest mistake in 50 years”.

Probuild was already behind schedule and bleeding money on a number of its projects before being placed into voluntary administration and Deloitte taking control.

It is believed to have been haemorrhaging tens of millions of dollars from the $350-million 443 Queen Street project it was building for Cbus Property on the Brisbane riverfront—a contract it is understood to have won with tender pricing $40 million less and a substantially quicker delivery timeframe of three years compared to four years from its rivals.

Other landmark projects on its $5-billion workbook included The Ribbon at Sydney’s Darling Harbour as well as the new CSL headquarters and the recently-completed first stage of the $2-billion West Side Place development in Melbourne.

Probuild is the largest casualty of Australia’s construction sector, a $360-billion house of cards that has been teetering on the brink from massive cost hikes due to pandemic-induced supply chain issues as well as severe labour and building materials shortages.

“The potential risk on large mega-building projects outweighs the current margins available,” said WBHO said in its statement announcing it was wiping its hands of Probuild.

“It doesn’t stack up in Australia—every builder in the world knows that,” he says. “But that’s just us cutting our own throats … it’s highly competitive.

“We’ll make 1 per cent this year but it’s not a steady 1 per cent, it’s up and down ... but next year should be good. I think it's going to come off and when turnovers are dropping that's when we do okay.”

Hutchinson says for some construction companies there’s “every bit of wishful thinking” in their tendering and they don't factor in any problems. 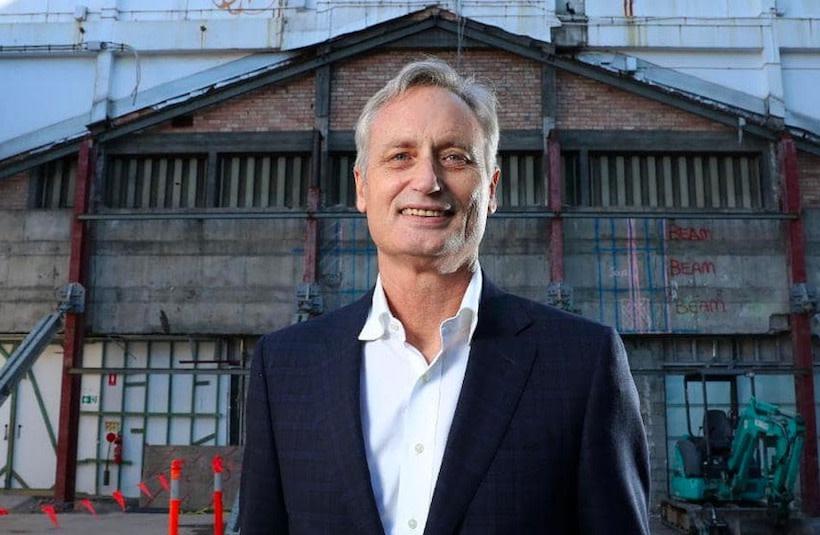 ▲ Scott Hutchinson: a lot of wishful thinking by some companies in tendering.

“That’s just not the way building jobs go," he says. "There’s difficulties and you’ve got to have it worked out. I’m a glass half empty person because that’s reality.

“If you’re doing a job three times or four times your balance sheet then it’s a bit crazy … unless you’ve really got it covered.

“Some of these companies, when they go for a job, they don’t go ‘well, this could work out well and we could make some money’, they just go ‘well, this is going to give us a job for five years’. So they don’t care how tight they go in or how stupid it is.

"As soon as you start searching for cash flow it’s all over, whether it happens in one year or three.

“And the very worst thing for a client is for the builder to go broke halfway through the project. It’s a nightmare—trying to get somebody to back you up to guarantee all the stuff that’s been done and trying to get all the guys back on site and happy enough to continue work.”

CreditorWatch chief executive Patrick Coghlan says the domino effect from the collapse of Probuild will deliver “a devastating hit to the Australian construction industry”.

“The demise of a business with the scale and reach of Probuild is bound to send shockwaves through the industry, as thousands of small businesses are impacted,” he says.

“Sadly, I fear this is the tip of the iceberg, and we could see many more going under, as an industry that was already under significant pressure is dealt another heavy blow.”

The construction sector now accounts for 28 per cent of the nation’s insolvencies—up almost 40 per cent in the three months to December, according to the latest Australian Bureau of Statistics data. 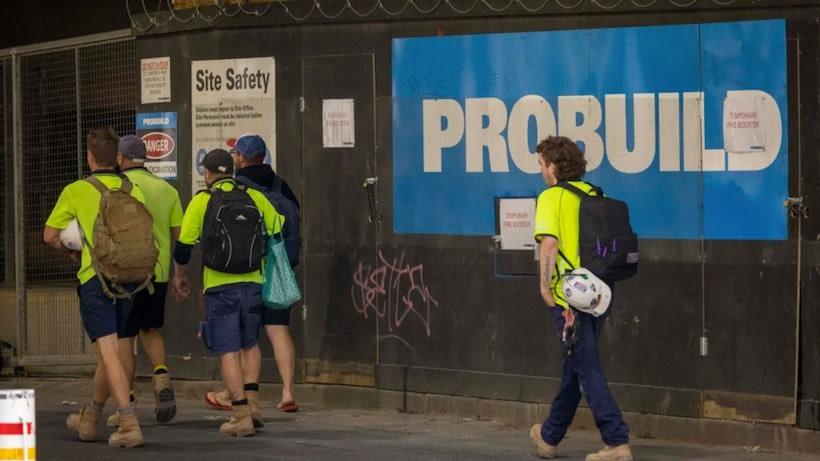 Australian Constructors Association chief executive Jon Davies says contractors will continue to fall unless radical action is taken to improve the sustainability of the industry.

“I don’t think there are too many surprised by Probuild becoming another sad statistic of Australia’s construction sector, unfortunately, and industry reforms are urgently needed or more contractors will go under," Davies says.

“The current focus of selecting contractors based on the lowest price and the greatest transfer of risk is unsustainable. Lowest price doesn’t mean greatest value.

“We have to move away from the idea that construction is a zero sum game with winners and losers.

“Contractors are being asked to lock in prices for risks that they cannot control such as material price escalation and pandemic risk for projects that in many cases will take years to deliver.”

Sydney-based construction firm Roberts Co’s chief executive Alison Mirams says the risk profile is the biggest she has seen in 20 years and the margins the smallest.

“And that’s not a good recipe for success,” she told a recent The Urban Developer vSummit.

“We’ve got a lot of escalation going on at the moment and there’s not many construction contracts out there that give builders a lot of relief.

“This year will be a very interesting year for the industry,” Mirams said.