A private developer has lodged plans for a residential tower on Chevron Island, a suburb currently awash with high-rise development as the booming local property market continues to gather pace.

The 28-storey project will comprise 78 two- and three-bedroom apartments on a 1000sq m site amalgamated from two smaller residential properties at 8 and 10 Parneno Street.

Plans, designed by Plus Architecture and managed by Urban Planning Services, have been lodged with the Gold Coast City Council on behalf of local developer Chevron Development Group and Yamba Partners.

While the site is bordered by existing residential unit blocks, including a three-storey apartment building to the south of the site, the tower would be the tallest structure on a street of mainly single-storey dwellings. 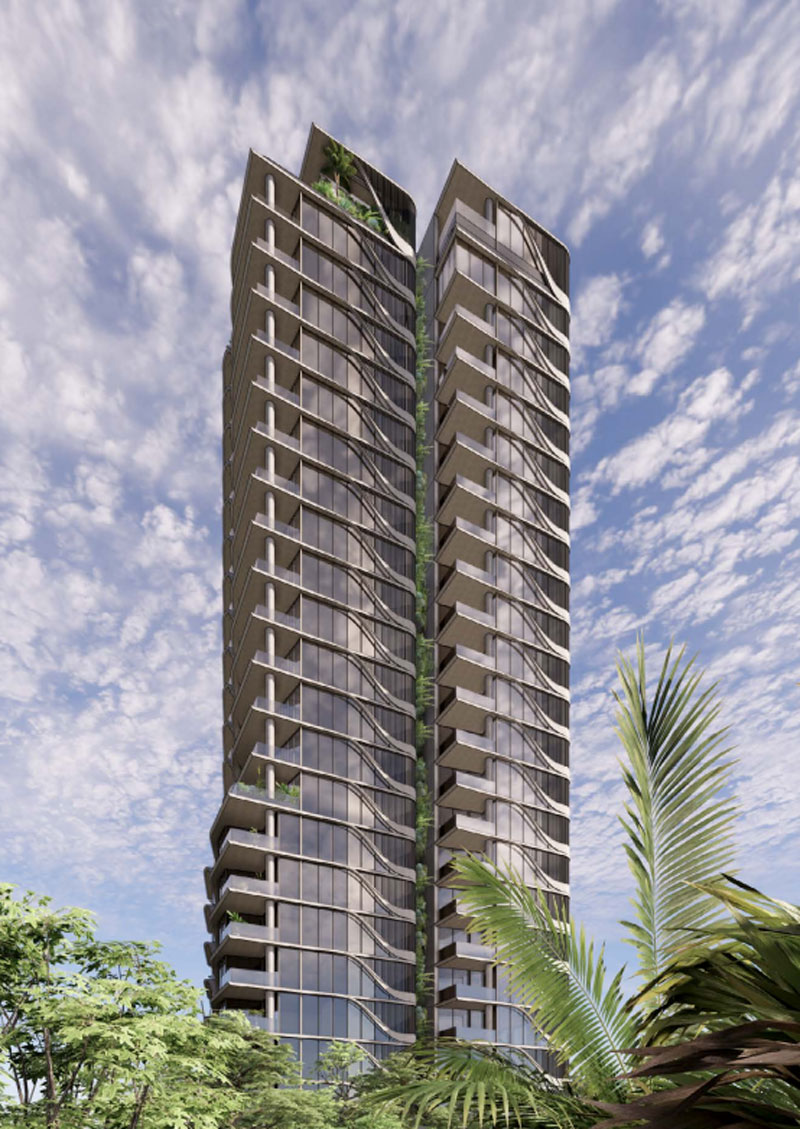 Momentum on the Gold Coast has accelerated post-Christmas with developers reporting that some luxury projects launched earlier this year are almost sold out despite premium pricing.

Chevron Island in particular has benefited from the high demand from sea-change buyers from both intrastate and major cities such as Sydney and Melbourne searching for increased affordability and lifestyle.

The city’s apartment market has also been experiencing a differing trend—switching from skyscrapers such as Q1 and Soul, both of which are more than 75 levels, to smaller projects featuring bigger apartments and higher prices.

Chevron Island, next to Surfers Paradise, the Southport Golf Club and HOTA, has become a hotspot for development with up to 14 mid-rise developments currently approved or under construction.

Chevron Island has no height limits currently under the City Plan as it is considered high density due to being within walking distance of two light rail stations.

At a neighbouring site, 17-19 Parneno Street, plans for a 14-storey building comprising 42 apartments, designed by BDA Architects and being developed by Sydney-based Draycon, are under way.

The Benson Family Group is currently forging ahead with plans for a 40-storey tower on Stanhill Drive, known as Chevron One, while a smaller seven-storey tower on the same street has also been approved.

Brisbane-based Ention Properties has also recently filed plans with the council for Greenwich, a 15-storey tower for the corner of Anembo and Aruma streets.

The development will have 46 units with a mixture of two- and three-bedroom units, and a four-bedroom penthouse.

On a 3000sq m site between 30-36 Mawarra Street plans are under way for a 47-storey tower, Odyssey Chevron, that will comprise 170 aged and disability care units.

HWI Saltwater has approval for a 30-storey tower, Bliss, on a 3000sq m corner site on Thomas Drive and Darrambal Street.

Marquee Development Partners is also pressing ahead with its 75-apartment building, The Catalina, due to be completed at the end of the year.

According to Urbis almost 800 new apartment sales were made on the Gold Coast in the first quarter of 2021, by far the largest amount since it began tracking the market in 2013, while supply has decreased.