The four stage, 20-year masterplan is planned for a vacant 38ha site surrounding the Belmont Park Racecourse on the shores of Swan River.

The masterplan, which upon completion will comprise 4500 homes, will be next to the Hassell-Cox-designed Optus Stadium and Sports Precinct, Chevron Parklands, the Stadium Train Station and Crown Towers.

The initial stage will be broken into four sub-precincts comprising 6000sq m of retail space and 20,000sq m of commercial space as well as private jetties and a rowing club.

To kick off the project, Golden Group plans to build 60 townhouses along the project’s north bank before moving towards the south-west of the site, delivering 130 townhouses and 1125 apartments across the next three phases.

Golden Group said it plans to maintain and enhance the qualities of the Swan River foreshore while delivering appropriately scaled and designed buildings that would celebrate the geometry of the racecourse. 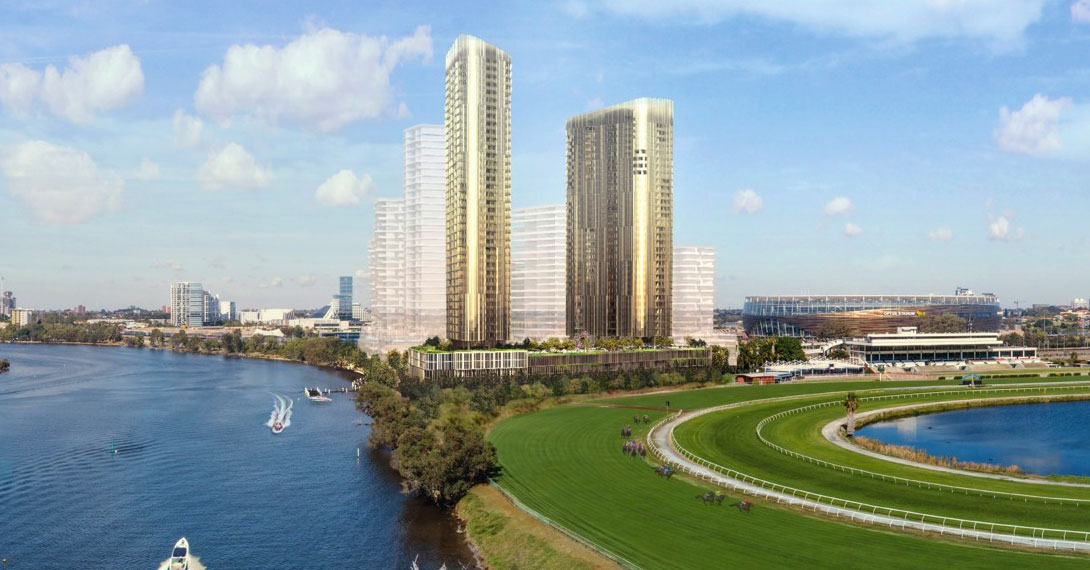 ▲ The first two towers within the project have also been designed by Hassell.

Indonesia-backed Golden Group, which commands a $5-billion portfolio, is a family-run business headed by Mimi Wong and husband Howard Sugiarso.

Their sons, Andrew and Leo Sugiaputra, handle the day-to-day running of the business.

The masterplan has been more than a decade in the making and on the cards since 2007 when Perth Racing flagged a residential and tourism precinct at the racecrouse.

Golden Group inked a deal with Perth Racing to develop the land surrounding its track in 2011 before buying into the project in 2013.

The developer had planned to launch the project in 2015, but decided to delay commencement due to market conditions at the time.

Sugiaputra said Golden Group had spent time a lot of time and investment engaging consultants to explore how to roll out the masterplanned community, which has been designed and modelled from inner-city waterfront developments around the world.

The developer began construction in early 2018 on a subdivision of the land that will support the nine-tower first stage.

Golden Group said the exact number of homes to be delivered in stages two, three and four will be determined at a later date and subject to market conditions.

The first stage is expected to be completed in seven to eight years.

The entire project is expected to inject more than $10 billion into the local economy and generate 25,000 jobs.