Build-to-Rent’s Role ‘Needs to Be Challenged’

Industry leaders have warned against labelling community, social or affordable housing, saying the practice risks discriminating against demographics that are simply looking for a place to live.

Andrew Gutteridge, the principal and founding director of Brisbane-based architectural firm Arkhefield, told a standing-room-only audience the idea of community, social, and affordable housing had always been confusing to many people.

“The primary outcome of that, especially with social housing or state housing, is it categorizes the housing into a very low economic group and puts the same demographic into that group,” he said.

“They then get labelled and the community gets labelled.

“And this gets even more severe, I suppose, when you go down the ladder, let’s say to homelessness.”

Gutteridge was speaking at a round-table discussion on build-to-rent (BtR) and affordable housing at The Urban Developer’s third edition of the Urbanity conference, on Queensland’s Gold Coast.

He pointed to the Queensland government’s current strategy, saying that during the early months of the pandemic it had cut the relationship between housing and support services.

“What they want now is to separate those two things, and simply deliver housing,” he said.

“And they want to deliver integrated housing. They don't necessarily want it to be labelled state, community or social or affordable. They simply want to promote housing for people.

“And then should people within that community, in that building, require support—which may well be just financial support for your rent, or it may be some sort of social work—then that support attaches to the person not to the unit for the housing.”

“But affordable housing is actually targeting more key workers and people who are basically on the median sort of wage, low to medium, we’re talking nurses and school teachers,” Ridgway said.

“We need to design our cities for those key workers, otherwise they will just become dysfunctional. People need to be able to live in proximity to their work. It's just a basic sort of principle.” 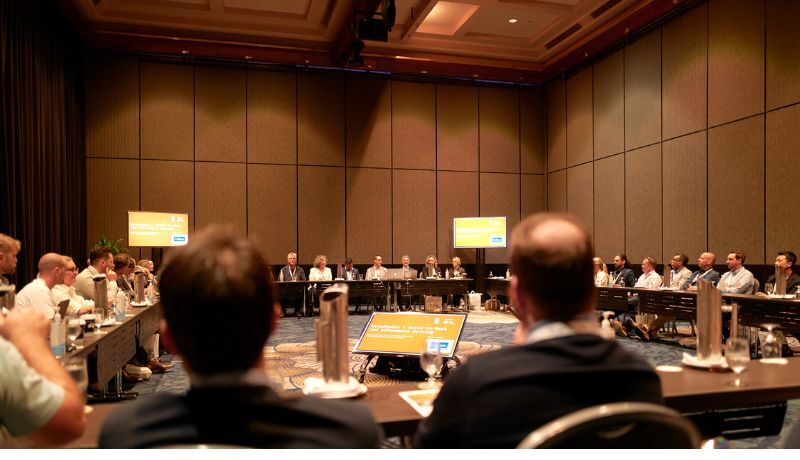 ▲ A section of those participating in the build-to-rent and affordable housing roundtable at Urbanity 2022 on Thursday.

National director of build-to-rent for Colliers Robert Papaleo told the audience it was important to understand how quickly the sector would grow.

“But while that’s fantastic, we also need to appreciate Australia over recent years has probably been producing—and this goes back to the peak years of 2017 and 2018—about 70,000 new apartments a year.

“Even with this growth in build-to-rent, which a lot of people are looking towards to deliver more supply and filling the gap, it's not going to be anywhere near enough to replace the built-to-sell products that we had been accustomed to in the last cycle.

“So I think the view that build-to-rent can fill the void and deliver affordable housing really needs to be challenged and fully understood.”

“Those that are in the sector have to take a 10, 15 or 20-year view. And the fact that we have 15,000 units in pipeline, coming up to completion, every single person behind that is taking a long-term view,” Paul said.

“The Singaporean government is the largest institutional investor in the build-to-rent market through GIC (the Government of Singapore Investment Corporation.)

Papaleo says the reality is Australian developers are in the early evolution of the sector.

Learn more about the build-to-rent sector and what’s ahead for this red-hot segment of the industry at The Urban Developer’s Build-to-Rent vSummit on Thursday, August 25.