Developers are suddenly turning their attention to Australia’s most liveable city as a new wave of opportunity beckons.

Adelaide placed third in the world’s most liveable city list while major developments in the city are attracting such heavyweights as Google, Amazon and Microsoft.

Office market vacancy data showed commercial occupancy in Adelaide was around 78 per cent during the pandemic and had only been affected by recent lockdowns when the rate declined to 65 per cent.

The promise of new jobs, along with the 760ha green belt around the city, is promoting population growth and the development and rezoning opportunities that come with it.

While prices have soared in other cities, relative affordability is driving residential growth in South Australia with rental vacancies dropping to 0.9 per cent in August.

Although dwelling prices increased 17.9 per cent during the past year, the median price is $522,180, nearly half that of Sydney.

Adelaide Lord Mayor Sandy Verschoor said her hometown was finally being recognised as an international city.

“There is a spotlight on Adelaide—we have done extraordinarily well [through the pandemic] and people have rediscovered the work-life balance,” Verschoor said.

“Particularly during the past two or three years there seems to have been a really focused increase of what are extraordinary and world-class developments.

“We are making sure we focus on the CBD and want to look at density of living ... so people can enjoy that lifestyle.”

The City of Adelaide recently formed a partnership with ICD Property for the central market arcade redevelopment.

The $400-million project would transform the 150-year-old market, next to Victoria Square, into a new hospitality and culture arcade, 249-room hotel, 210 apartments and an A-grade office tower.

ICD managing director Matthew Khoo said the landmark project was a beacon for others.

“It’s already a place that has 9 million people visiting, so imagine what it’s going to be like post development,” Khoo said.

“We are going to push the boundaries of what city living is about. I want to see this into an Asian-style night-time economy.” 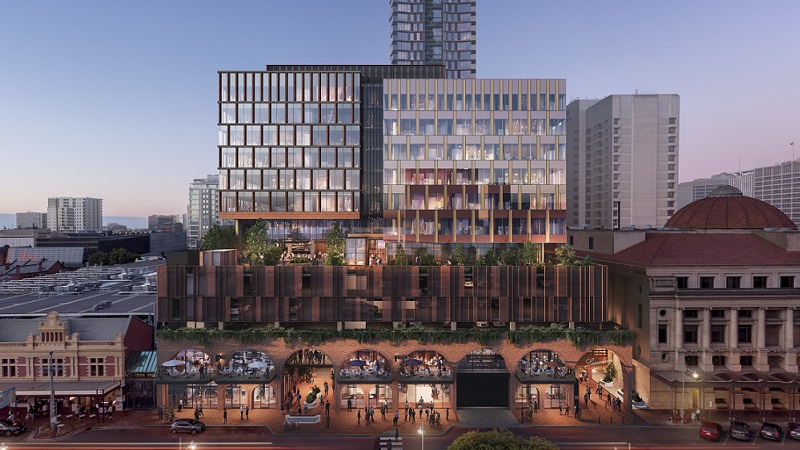 ▲ ICD Property and the City of Adelaide have partnered to create the $400-million Adelaide Central Market development, designed by Woods Bagot.

Khoo said there was a push for the city and state to revolutionise and that it was now far easier to get meetings with the council and other bodies of authority.

“There’s a real sense of ‘we want people to do business here’, and that level of excitement and lack of arrogance is really refreshing,” he said.

“When you’re dealing with larger cities there can be a sense of complacency because developers are knocking on the door all the time.

“We think that there’s a really exciting period in the next 10 years—and we thought that three years ago.”

Adelaide is about to be further propelled by massive defence deals including a $5.1-billion contract to upgrade destroyers from 2024 and controversial new plans to build nuclear-powered submarines from 2026.

One of Port Adelaide’s largest logistics centre owners, Quintessential Equity, is banking on the city’s defence and innovation boom with a number of office assets across the city.

Its most recent buy, 100 King William Street, was acquired for $71.5 million. Quintessential Equity plans to refurbish the office building—adding breakout spaces for tenants to interact and collaborate along with additional facilities to encourage people back to the office. 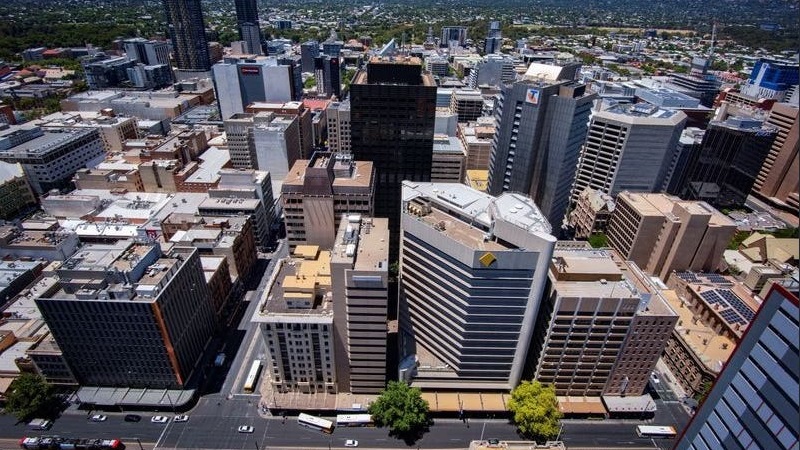 ▲ The Commonwealth Bank building at 100 King William Street which is the main road through the middle of Adelaide CBD.

Quintessential executive chairman Shane Quinn said they had been investing in the city since 2007.

“This gives us a strategic foothold in arguably the best location in the Adelaide market, where we believe there is still a lot of value for assets able to be regenerated to meet the post-pandemic tenant demand,” Quinn said.

“We’ve always viewed Adelaide as a place that was affordable with a great lifestyle but the last piece of the puzzle was aspirational white-collar jobs.

“During the past few years it’s definitely changing and it’s really at the forefront of change.

“The submarines and defence spending around ship building is more than $90 billion and drives the state GDP by more than 3 per cent on its own—it’s like a mini mining boom.

“It’s going to go very well with advanced manufacturing, industrial and creative innovation for the office.”

Quintessential is also developing the $400-million Entrepreneur and Innovation Centre at Lot Fourteen.

The building is part of the new 7ha innovation precinct in the north-east corner of the CBD, on the site of the old Royal Adelaide Hospital.

“Focusing on some of the state’s strengths in space, defence and high tech has provided the opportunity to drive those clear business outcomes and clustering like-minded businesses to add value to one another together physically in one location,” Dixon said.

“In the start-up hub we have small to medium businesses evolving and we are obviously attracting global names like the Googles and the Amazons and Microsofts.

“There is a high level of buy-in from those larger companies, who see value in the opportunity to be able to work alongside that innovation in a start-up environment.” 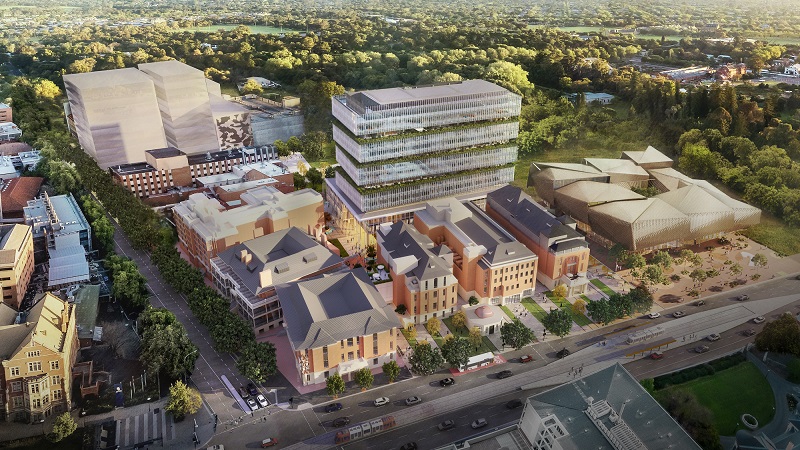 ▲ The EIC building at the centre of Lot Fourteen and the Aboriginal Art and Cultures Centre on North Terrace.

The state government project has progressed from its establishment in 2017 to a growth phase, adding new buildings.

“The next wave will be part of the Adelaide City Deal so we have the Aboriginal Cultural Centre, which will give another dimension to this precinct,” Dixon said.

“There’s probably about three or four other development sites which will come online in the future.”

Joining these major projects around Adelaide is the Australian Bragg Centre and SAHMRI building in the biomedical research precinct.

Like the Adelaide’s Central Market and Lot Fourteen’s art centre, the medical facility was designed by Woods Bagot.

These city-shaping projects add to the emerging CBD landscape which also included the incorporation of traditional building within designs including Charter Hall’s art-deco-based office tower and Greaton’s GPO hotel. 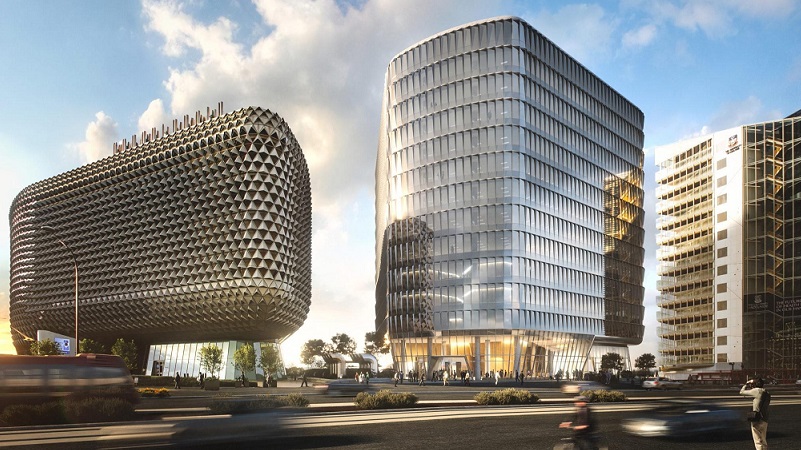 ▲ The SAHMRI building and Australian Bragg Centre are located in the CBD's north-west, next to the Royal Adelaide Hospital.

Woods Bagot associate principal Alex Hall said Adelaide was at a scale where new designs could be implemented across the city.

“You have to find the right balance in Adelaide in terms of how you make it stage-able and the scale of it and the type of offering,” Hall said.

“Once there’s a set of strong benchmark projects it just opens the door for more.

“We’re having a renaissance at the moment—the level of the projects, certainly in our studio, are of the highest design quality, it’s very elevated.”