Australian housing values grew 22.1 per cent last year and the market is showing signs this extraordinary rate of growth, not seen since the 1980s, is slowing across most of the capital cities.

Yet as the rate of dwelling value appreciation slows, capital city and broad rest-of-state markets are still to peak, causing plenty of speculation about whether this will occur in 2022 and mark the start of a downturn.

Corelogic research director Tim Lawless explains when a market has peaked, the biggest factors impacting Australia’s housing in 2022 and the trends property watchers should be keeping an eye on this year.

When to call a peak in housing values

“To categorise a market peak across a region, we would generally be looking for a consistent trend in negative monthly movements,” Lawless said.

“To date, the quarterly trend remains positive across the major regions, with the only exception being Darwin houses, which is the only capital city housing sector to record a negative quarterly change.

“The Darwin reading can be more volatile than other cities due to the small size of the market, so it may be too early to call a peak in this market even though the quarterly growth rate has turned negative.”

Peak vs peak rate of growth

“Although we can’t see any evidence that specific housing markets have peaked, it is clear that most markets have moved through a peak rate of growth,” Lawless said.

“What I mean by that is the point at which markets achieved their biggest monthly growth rate. We saw most of the capitals moved through a peak rate of growth around March last year.”

Sydney’s monthly growth rate peaked at 3.7 per cent in March and has since reduced to 0.3 pert cent.

Melbourne’s monthly growth rate peaked at 2.4 per cent in March, reducing to -0.1 per cent in December, the first monthly decline since Oct 2020.

Perth’s monthly growth rate peaked at 2.7 per cent in February. After recording only a single month of decline, -0.1 per cent in October 2021, the monthly rate of growth has reaccelerated to reach 0.4 per cent in December.

Hobart’s monthly growth rate peaked at 3.3 per cent in March and dropped to 1.0 per cent in December.

Darwin moved through a peak rate of monthly growth in April at 2.7 per cent and was at 0.6 per cent in December.

Canberra moved through a monthly peak in March at 2.8% and was at 0.9 per cent in December.

“The only broad regions avoiding a slowdown in the pace of growth in housing values are Brisbane, Adelaide and regional Queensland,” Lawless said.

“These markets are benefitting from a healthier level of affordability compared with the largest capitals along with a positive demographic trend and consistently low advertised stock levels.

“We could see our two biggest capital city markets Sydney and Melbourne hit their peak later this year although the timing is highly uncertain and depends on a broad range of influences.”

Historic periods of decline to trough for house prices 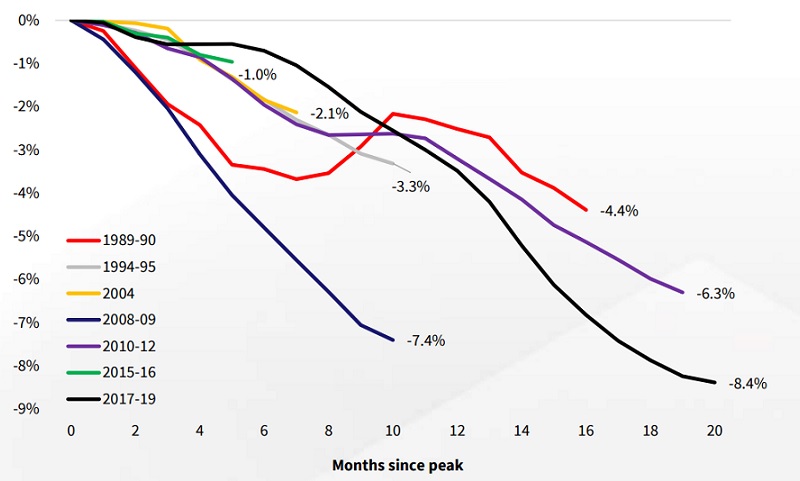 “There are a lot of moving parts that will affect the trajectory of housing outcomes,” Mr Lawless said.

The three biggest factors to impact market movements are:

1. Policy-related factors such as interest rates and credit availability.

2. Market factors like the trend in advertised stock levels and housing affordability.

3. Economic factors such as labour market conditions and wages growth.

“Arguably, the surge in Covid cases associated with the Omicron variant could push some of these policy tightening decisions back, with APRA or the RBA unlikely to tighten their policy settings with so much uncertainty associated with the latest case numbers,” Lawless said.

“There is also some downside risk from a delayed economic recovery associated with less spending activity and heighted uncertainty, although a slower than forecast economic recovery implies rates would stay lower for longer.”

Key signals a market is approaching its peak

“Normally, housing growth trends will gradually slow before moving into a correction phase, which is what we are seeing at the moment,” Lawless said.

“However, this isn’t always the case. During periods of shock such as the GFC or early in the pandemic, housing trends turned quite sharply into negative territory.”

Other signs to watch for include:

• softening vendor metrics such as longer days on market and larger levels of discounting.

“It’s fair to say we are currently seeing a softening in all of these metrics, albeit from an historically high base,” Lawless said.

“We also consider macro factors, which could have an impact on housing demand such as the potential for higher interest rates or tighter credit policies.

“Both of these factors have a high level of uncertainty at the moment, especially considering the latest wave of Covid cases associated with Omicron which could weigh down economic activity.”

Historic periods of decline to recovery for house prices 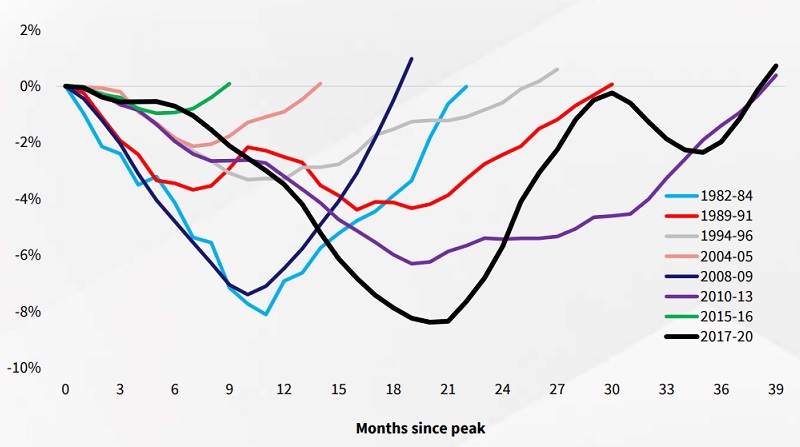 What to expect after a market peak

“Once a market peaks, the typical trend is that values will experience a period of decline,” Lawless said.

“The duration and severity of the decline is dependent on a broad range of both macro and micro factors.”

Since the late 1980s, Australia has experienced national downturns that have ranged in severity from a -1.0 per cent peak to trough decline in 2015-16.

This was a temporary correction following the first round of credit tightening via APRA’s 10 per cent speed limit on investment lending, to the most recent -8.4 per cent decline experienced during the 2017-19 downturn.