Proposals have been pitched for two new medium-rise residential towers along a popular Gold Coast beachside strip and development hotspot as it continues its urban evolution.

The plans have been filed with Gold Coast City Council as it pushes ahead with planning for the fourth and final stage of the light rail network from Burleigh Heads to Coolangatta.

The controversial $2.7-billion extension has come under fire from residents who fear it will increase traffic chaos on the Gold Coast Highway through Palm Beach.

After the federal-election win by Labor, and an election campaign backflip by the Liberals over support for the project, the council has voted to approve a $7.5-million budget allocation for a business case study on the light rail extension.

Coincidentally, development applications have been lodged for the two new residential towers along the planned light rail route at Palm Beach.

It would comprise 41 one, two and three-bedroom apartments—some with home office spaces—across eight levels above a ground-floor wellness-recreational area with hot and cold pools, steam room and day beds.

Other facilities in the plans include a private dining room and boardroom, plus secure parking with optional electric vehicle charging stations.

But according to the filed documents, the Cottee Parker-designed proposal does not comply with the specified performance outcome of the medium density residential zone code. 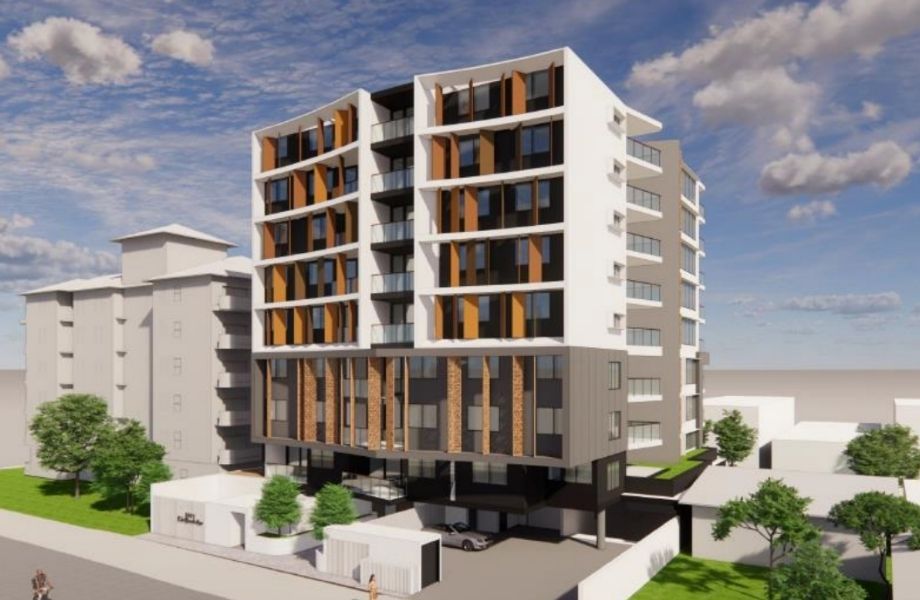 ▲ Render of the proposed medium-rise tower at 1409-1411 Gold Coast Highway at Palm Beach.

However, a submitted planning assessment report deemed the proposal “appropriate in form, scale and intensity for its urban context”.

“Notwithstanding this non-compliance, the proposed development complies with the purpose of the medium density residential zone code, including the overall outcomes of the zone code,” it said.

“In all, the proposed development will provide a high-quality residential development product which meets the demand for housing in the Palm Beach area.”

Spina is the director of Townsville-based developer PDS, a firm with a portfolio of major projects in north Queensland, including several apartment projects, residential subdivisions, mixed-use developments and Townsville’s V8 Supercars circuit.

The Palm Beach proposal is his first development foray on the Gold Coast. Pending its approval, the project is scheduled to be launched to market in July.

CBRE’s Nicholas Clydsdale, who has been appointed to market the project, said the stock available in Palm Beach was failing to meet demand because it was only accessible to a small percentage of the population.

“This development has been designed to appeal to the local owner-occupier market with a diversity of residences,” he said.

Up the road at 1276-1280 Gold Coast Highway, a development application has been lodged for another nine-storey apartment project on a 1783sq m site at the corner of Fourteenth Avenue.

It has been filed under an entity linked to business partners Nedale Hamdan and Charlie Ayoub from Sydney-based developer Masscon. 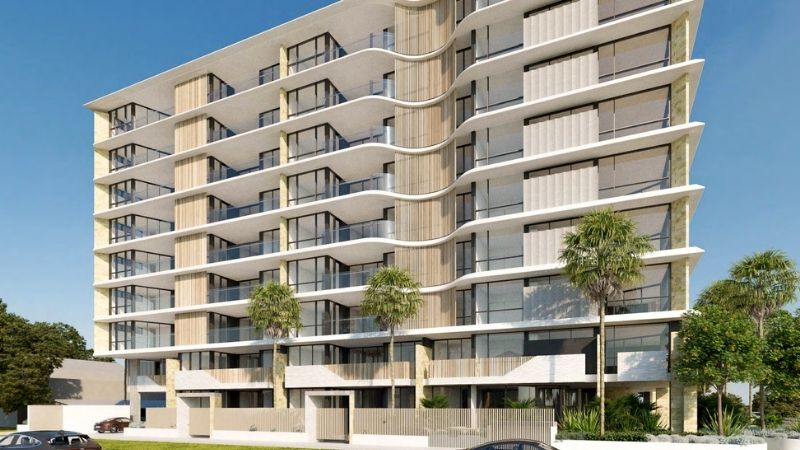 It will replace a single-storey commercial building occupied by a health centre.

Similar to the other DA, a submitted planning assessment report concedes the proposed development is not compliant with the residential density performance outcome applying to the site. It is also seeking “minor” variations to setbacks and site cover.

The site’s residential density overlay allows for one bed per 50sq m and the lodged plans, with a total of 131 bedrooms, represent one bed per 13.6sq m.

But according to the report, the development “complies with the relevant overall outcomes of the medium density residential zone code”.

“In particular, the proposed built form sits comfortably within the urban fabric of the surrounded area and will not result in any perceivable impacts to infrastructure,” it said.

“The proposed development will ensure that efficient use of the site is achieved and that it contributes effectively to providing a mix of housing for a permanent residential population in a highly accessible location, where residents will benefit from access to a wide range of services and facilities, recreational opportunities and public transport.

“On this basis, it is reasonable to conclude that the proposed residential density of the development represents a positive response.”

Palm Beach has emerged as one of the Gold Coast’s development hotspots with a rising number of tower proposals, including S&S Projects’ plans for a 23-storey residential project—the beachside strip’s tallest modern tower—at the corner of Palm Beach Avenue and 1128-1132 Gold Coast Highway.