It was an odd Australian start to a spring season in September when the last bit of track for a line was laid.

The weather had been wild, flooding was a concern and many people were looking more at inflation and interest rates and the havoc it was wreaking on an industry already beleaguered by Covid-19.

They were wondering where the best place to invest was, which sector, which state, which suburb?

Where they weren’t looking was Dandenong, but one developer was.

“Dandenong is different because all the land has been accumulated for the developer to come in with a vision to deliver on it,” Capital Alliance’s managing director, Mohan Du, says.

Capital Alliance is undertaking a decade-long masterplan for a $1.5-billion mixed use precinct.

“Can you make sure that if you have cobblestones, that they are graded so that people with mobility aids can use them?”

The question is raised by a member of Dandenong’s community.

As she peers into her webcam, members of the development team for Capital Alliance take notes.

This is a community consultation session for the Revitalise Central Dandenong project—a $600-million, 15-year project to revive the city centre next to Dandenong Train Station.

They have drawn up a masterplan, and are now finessing it with feedback from community, council and other stakeholders.

Once finalised, it will be submitted to the Victorian planning minister for approval ahead of public exhibition.

That was in 2009 when the idea of bringing in investors and creating a museum was also in the works.

But then in 2019, the Victorian government put it to public tender and in 2020 Capital Alliance’s bid won. ▲ A render of what Foster Street could look like once the project is completed.

“You’re only really dealing with the one entity that could handle the land in this instance, which is Development Victoria and then it just makes the process more visionary, because you’re not worried about doing several different planning submissions,” Capital Alliance’s managing director, Mohan Du says.

By then the Revitalising Central Dandenong project had already begun, starting with community consultation in 2005 as slowly projects such as the Drum Theatre and Cumulus Apartments were started and finished.

The Indian Cultural Precinct Framework was drawn up in 2017 and 2018 and one of its key objectives was ensuring that future development in Dandenong’s city centre would incorporate and support the precinct and its traders.

New buildings would be constructioed for Little India's traders as part of Stage 1, along a special lane created on the block fronting Halpin Way, Foster Street, Thomas Street and Mason Street.

Foster Street instead will front open space with the tallest towers in the project along the railway line to prevent overshadowing the rest of the residential, retail and commercial buildings.

The masterplan has seven stages—the first will have a supermarket, food market hall and retail, commercial and residential buildings along with the new buildings for Little India.

“The other big tower is earmarked for two hotels.”

DKO Architect Jesse Linardi says the masterplan has been designed for commuters walking from the railway station along Foster Street to the new Little India laneway and then through it to the offices and town hall.

▲ DKO Architects' renders of what the Little India precinct could look like.

“We envision it being a little bit like Hardware Lane in the City of Melbourne,” Linardi says.

“These areas are connected to significant public realm and then the built form is crafted around that.

“Little India is a critical piece of the puzzle.”

But Covid-19 has had an impact.

The test will be to maintain the character of the area, to make it work for the community that already is a part of the city centre in shopping, working and living there.

The project is expected to generate $375 million for the Greater Dandenong economy and 3890 jobs during the construction period. It will create 8413 direct jobs by 2041 and $1.5 billion a year when the project is complete.

Capital Alliance is building another mixed-use project on Pearl River Road in the Docklands but there is something more tangible that connects Docklands to Dandenong.

Two beacons guide around 3000 ships through the channel and into the Port of Melbourne, generating more than $118 billion in trade value each year.

In 2017, a study estimated that each vessel coming into the Port of Melbourne brought in six full-time equivalent jobs and $500,000 in household income as part of an average $1.85 million in benefits to the state’s economy.

But you can’t benefit from the success of Australia’s largest port if you are nowhere near it.

In 2023, more track will be laid and older tracks restored as the Port Rail Transformation Project begins.

When it is done, port rail shuttles at the Port of Melbourne will begin to run, five times a day, up and down the line through Victoria’s changing landscape. 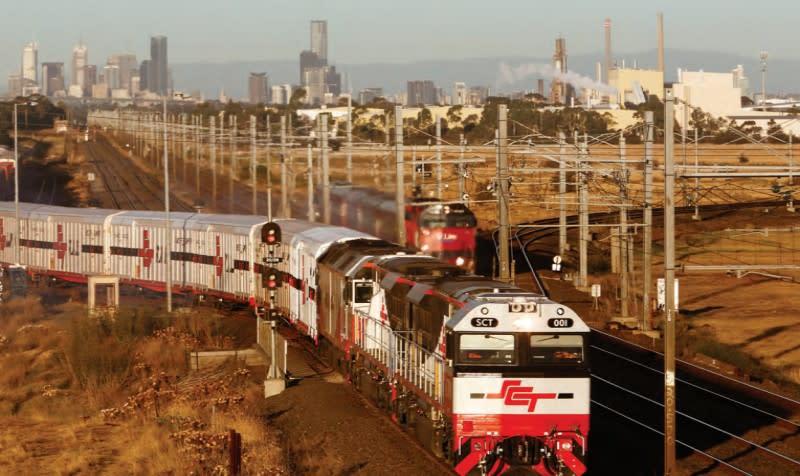 ▲ The Port Rail Transformation Project will upgrade freight railway lines at the Port of Melbourne to prepare for future expansion.

End of the line

In Dandenong South, the outcome of a $28-million joint investment by the Victorian and federal governments sits gleaming in the spring sun.

The money has funded the connection of a railway line from Cranbourne to Salta Properties’ Dandenong South Intermodal Terminal.

But this is just the terminus. Salta’s project has further to go.

And jobs means a necessity for housing and services in the area: if you want workers they have to live reasonably close by and have what they need.

It’s a good sign for developers who can build the housing, the retail, the offices needed to support the services that people will want or even the upgrades to other surrounding infrastructure.

When the line and terminal are done, Dandenong and Dandenong South will have a level of access to the port and its business only rivaled in a short delay in time by the four municipalities that border the more than 500ha of land it covers. 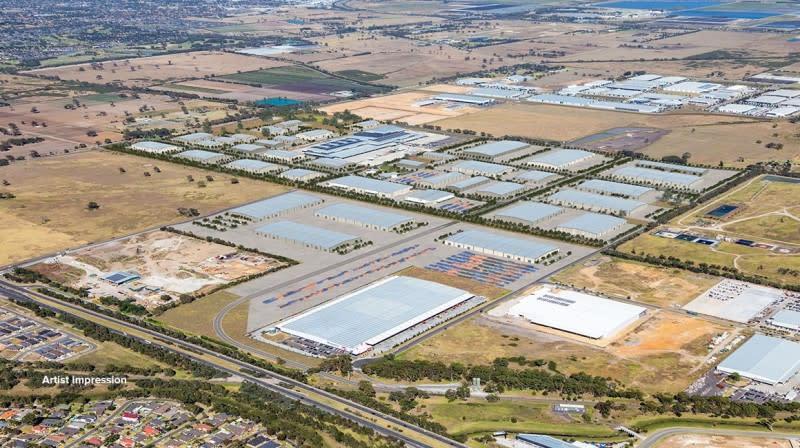 ▲ A render of what Salta's industrial estate in Dandenong South will look like once complete.

Salta expects the end value of the entire estate to be more than $1.5 billion especially as demand for industrial space has spiked over the past two years while supply dwindles.

“So, to the question of how can Dandenong be the second city of Melbourne?” Du said.

“Well, I think there’s a lot going for it—we’re just one element, we are one part of the machine; there’s a lot happening again with all the logistics facilities there.

“The inland port that Salta is developing, that’s going to be amazing for the area.”

New arrivals to the centre

So far in Dandenong Pellicano’s Questa Apartments, Grocon’s Department of Human Services building and a new ATO office have sprung up in the city centre.

Social housing is also needed and a state government project is also in the works at Site 9.

“We need 20,000 homes for social housing in Victoria,” says Srinivasan, who is also the Mental Health Foundation chief executive.

“I know what happens with homelessness and mental health in Victoria.”

Affordable housing is also on the cards.

“We’re not in the middle of the city so we’re not going to be selling these apartments for $10,000 a square metre,” Du says.

“We’re going to be looking at something that will be affordable so everyone can get in and the local residents can afford to also purchase them.

“So we do want to be aspirational with our plans for the revitalization of central Dandenong, but those plans do not include selling high-end apartments at a ridiculous rate per square metre.”

The ABS census data for 2016 shows that there were more than 12,000 Indian-born residents alone living in the City of Greater Dandenong with more than 52,000 in Melbourne’s south-east and more than 170,000 in Victoria.

It means Indians now account for 10 per cent of Victorian residents born overseas. That number does not include any other residents with heritage from the South Asian subcontinent.

“Because most of the Indian grocery traders were from Dandenong in those days, it didn’t and doesn’t matter where you live in Melbourne, there’s only one place to come to,” Srinivasan says.