“My father was a builder-developer and I grew up in a block of eight flats in the western suburbs of Brisbane at Corinda,” the Arklife founder and managing director says.

“Dad owned all those flats and my brother and I, on Saturday mornings, would go and collect the rent.

“They were the days when people left their front doors open. They’d just leave the rent on the kitchen table and we’d scribble out a receipt.

“Then in the afternoon we’d have a barbecue out the back and all the residents would come and join us, and we’d have a game of cricket or touch football.”

Not that he could have known it back then but it was a seminal part of Ponton’s upbringing that—sharpened by a 25-year-plus journey in residential and commercial property development—would be key to shaping the successful community creation model of Arklife.

As a specialist vertically integrated developer, owner and operator of build-to-rent assets, Arklife currently has projects to the value of just over $700 million under management.

All—including its third and biggest yet-to-be-revealed project—are in Brisbane but the company has a firm gaze on future plays in the Sydney and Melbourne markets.

“Our approach is a lot different to others in some ways,” Ponton told The Urban Developer. “We’re providing a home and we come from a customer-first approach. “We don’t manage our buildings via a set of rules, we manage them culturally.

“The business is really design and technology led in a lot of ways—and that’s all about the customer. Everything we do is around the four pillars that we believe the customer looks for—and they are health and wellbeing, community, leadership and career, and culture and events.

“Essentially, they feature in everything that we do, and our buildings are both designed and run in that way. And so our engagement with our customers is quite strong, we’ve become quite friendly with them.”

The seed for Arklife was planted in Ponton’s mind in the mid-2000s while he was working at Macquarie Bank, which was then looking at investing in applying operational models of multi-family—as build-to-rent is known in the US—to the Australian market.

But then the GFC hit and Ponton moved into the role of head of business and development with Grocon.

One of the projects he worked on with the Melbourne-based developer was the athletes village for the Gold Coast 2018 Commonwealth Games with a view to its conversion post-event to Australia’s first large-scale build-to-rent community—known as The Smith Collective.

“Speaking to some of the international capital providers, you know, it made me think that we were on the right track,” he says.

It was enough to convince Ponton to have a crack himself at creating a build-to-rent platform, which he did with the backing of other investors and ADCO, one of Australia’s largest builder-developers. But there was an early hiccup.

The original name for the new platform—Liv—also had been registered about the same time by property giant Mirvac as its new build-to-rent brand.

“We just made a gentlemen’s agreement when we both found out,” Ponton says. “I just said, ‘We don't want to have an argument, that’s OK’ … and that's when Arklife was born about 2018.”

To date, the company has two build-to-rent projects out of the ground—the operational 89-apartment Arklife Robertson Lane in the James Street precinct of inner-city Brisbane’s Fortitude Valley and the 265-apartment Arklife Cordelia under construction in South Brisbane and due for completion in early 2024.

The first tenants moved into Arklife Robertson Lane in mid-October last year and the building was fully occupied by the first week of February this year.

On the other side of the city, Arklife Cordelia will incorporate benchmark sustainable design principles and the refurbishment of a heritage building constructed in the late 1800s as one of the city’s first boot-making factories.

It is a collaboration with the Clean Energy Finance Corporation and ADCO and was chosen as the maiden transaction for listed non-bank lender Qualitas’ $1-billion Build-to-Rent Impact Debt Fund.

Ponton is keeping the details close to his chest except that it will comprise more than 300 apartments—but it is understood the company has its foot on a site near JGL Properties recently completed 14-storey Jubilee Place office building in Fortitude Valley. 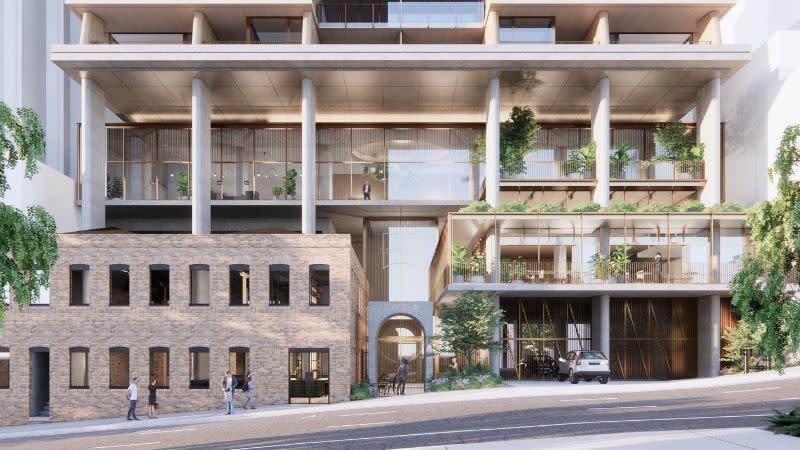 ▲ A render of Arklife’s Cordelia Street.

“And what our research tells us is that while it's good to be close to work, it's not the predominant reason why people would live in one place over the other, they would much prefer to live close to where they go out.

“With Robertson Lane we actually were marketing it for the first six weeks without a photo of the building because it wasn't finished yet and we leased 55 per cent of the apartments—it was all location and lifestyle driven.”

Another key aspect to Arklife’s successful build-to-rent model is its focus on ensuring its buildings accommodate a very broad target market. Of its mix of residents about 68 per cent are aged under 35, 17 per cent are from overseas or interstate and another 17 per cent are families.

“We do a lot of work on our target market in terms of apartment layouts, sizing, finishes and furnishings,” Ponton says. “And also, as you know, health and wellness has become very much part of people’s lives. So, the first thing we actually design now is the gym.”

In the US market—where multifamily REITS are consistently among the top 10 best performers—there is “some pretty amazing stuff happening” when it comes to amenity add-ons in the asset class, Ponton says.

“On the higher-end buildings, they’ll have Michelin-starred restaurants just for residents … I don’t think you’ll see us doing that anytime soon.”

At last count, Australia’s burgeoning build-to-rent sector comprised 60 projects totalling 22,254 apartments with an estimated value of $13.6 billion. Only 6 per cent of these projects are operating, 11 per cent are under construction and 83 per cent are still in the planning stages.

According to Ernst & Young forecasts, over the next decade or so the sector has the potential to rapidly grow to account for 10 per cent of the nation’s rental pool—the equivalent of 375 projects totalling 350,000 apartments worth an estimated $320 billion. “We all know each other. We’ve all been through each other’s buildings. There’s room for everyone in some ways.

“The build-to-sell market is relatively challenged, rental demand is continuing to grow and rents are increasing. Supply is the answer.

“We can, however, see more institutional investment coming into Australia.

“Australia has a very mature, stable institutional market for commercial office, retail and industrial property. And we don't see build-to-rent being any different.

“But, again, it has got a long way to go before it dominates the incumbents in the market, that’s for sure. And it will take many years—it’s just a drop in the ocean at this point.”

He says tax regimes across the country are “still a bit of a handbrake” on the sector’s growth but operators are hoping that will be overcome in time.

“New South Wales has moved towards incentivising build-to-rent in terms of land tax dispensations. Queensland has not done that yet. I'm not sure if they are thinking about it but it all helps.”

Ponton confirms Arklife is currently scouting beyond the Sunshine State’s borders to expand its portfolio and pipeline.

“We’re looking in Melbourne and Sydney. It’s just we’ve found the demand-supply dynamic has been more advantageous in Brisbane compared to other states.

“But we’re seeing the market change. We’re seeing a transition where more sites are coming to the market because of the conditions, the environment and we'll probably see a bit more activity in Sydney and Melbourne in the next 12 months than what we’ve seen in the past 12 months.”

He pauses and reflects: “In some ways, we've sort of grown quite quickly and a little bit under the radar.

“We've just got on with it. And, you know, as the market evolves and grows, so will we.”