A bold new blueprint for Darwin’s waterfront has been unveiled with plans for Australia’s first saltwater surf park but minus the “salties”—crocodiles, that is—as its centrepiece.

The $250-million masterplan—about half of which is shovel-ready pending funding—is touted as the potential catalyst for a new era of tourism, development and population growth in the Northern Territory’s capital city.

Public and private investment nudging $50 billion is already driving infrastructure projects and urban development that has put the nation’s northernmost CBD on the cusp of a city-shaping transformation.

The state-owned Darwin Waterfront Corporation recently has taken the wraps off its own game-changing vision but to become a reality it will need a further $200 million in federal government funding.

It is seeking the backing through an extension of the Darwin City Deal, an historic agreement between three levels of government to revitalise the CBD with a new Charles Darwin University city campus as well as the redevelopment and "greening" of State Square to cater for outdoor events and festivals.

The Darwin waterfront vision is a major expansion and re-imagining of the existing precinct that currently includes a convention centre, aquatic and sporting facilities.

It involves the creation of a large and lushly landscaped central cove built around a new sustainably designed surf park—with talk of it being Australia’s first man-made break using saltwater—as well as a snorkelling and diving lagoon teeming with tropical fish and coral. 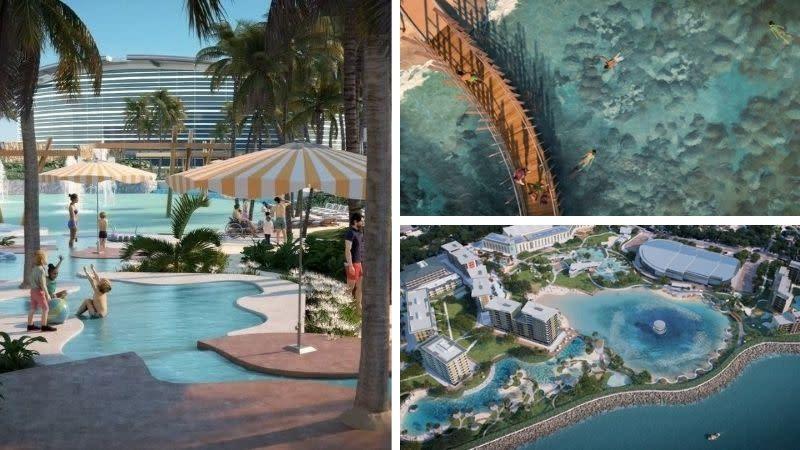 ▲ Concept rendering of the surf park proposed for Darwin.

“Large transformative concepts like this have the potential to literally change the face of our city, and change how both residents and tourists interact in the precinct and the city as a whole,” Urban Development Institute of Australia NT chief executive Catriona Tatam said.

“The economic flow-on effects of such a development would allow the NT to reap benefits for years to come.

“If the federal and territory governments are willing to financially back this project, it could be a game-changer for the vibrancy of Darwin.”

The design concept for the second stage of the Darwin waterfront precinct’s expansion has been two years in the making and started as a review of its existing aquatic facilities by Brisbane-based aquatic architecture specialist Liquid Blu.

Liquid Blu then partnered with another Queensland firm, urban planning and design consultancy Place Design Group, to create the concept for the central precinct masterplan.

Place Design Group design director Clint Wood said the project team’s vision was to “deliver an authentic world-class destination unlike anything else seen before in Australia, integrating meaningful cultural and learning experiences”.

“We wanted to showcase the very best of the Northern Territory and capitalise on its outdoor tropical lifestyle, picturesque scenery, and cosmopolitan atmosphere,” he said. 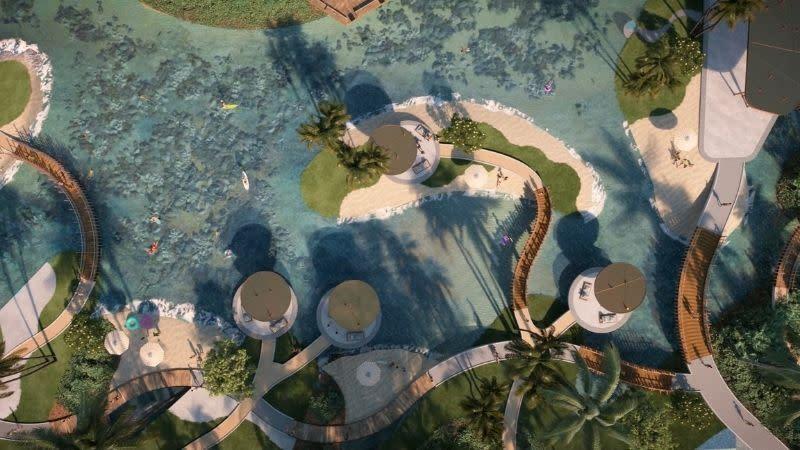 ▲ The plan is being lauded as a game-changer for Australia's most northern city.

Corals propagated both naturally and using 3D printing to replicate the intricate reef structure needed to foster new growth will be used in the planned tropical lagoon.

“We’re a peninsula CBD and our connection to water is absolute—it’s all around us. But it’s not accessible to everyone given some of our native wildlife (crocodiles, sharks and stingers).

“Together with the world-class surfing facility it will unlock the city and its unique surrounds and climatic conditions to southern audiences and potential new residents to Darwin.”

Burke said the waterfront vision “stacks up from an economic perspective” and, pending funding approval, was “ready to go”.

“Few opportunities exist to revolutionise the face of an Australian capital city in the way our masterplan can for Darwin,” he said.

“We’re basically doubling down on our existing investment to transform the precinct into something that will be nationally and globally competitive.

“Large parts of it are ready for early contractor involvement and it is more than 50 per cent detail designed.

“If we can get funding, we want to be turning soil this year and we see the entire central precinct vision being completed within about four years.”

Burke said if the vision for the waterfront development was realised it would also unlock an additional 10ha of harbour-front land with the potential of attracting circa $1 billion worth of private investment.

“Darwin is a fabulous tropical city but it is missing some essential ingredients and we think this will really tip it into a destination that will be firmly on people’s to-visit list. We think it’s a game-changer.”

Surf parks are an asset in the ascendancy with several in the works across Australia, including Sydney's first, which was recently approved for a site at Olympic Park.

In Queensland, a proposal for a surf park on the Sunshine Coast has been approved by the council, while on the Gold Coast a DA for a wave pool at Parkwood has been filed.